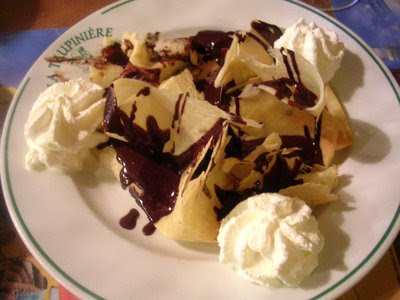 In France we have all these Pagan rituals, loosely tied up with religious holidays but in fact inherited from some immemorial pre-Christian stuff. On the Epiphany we eat the Magi cake (I've just been told that La Maison du Pain was making them, I'm so happy!), for Easter we eat legs of lamb with flageolet beans, and in between there's Lent, something I'm not very good about but I'm pretty certain it is not about dieting to look good in your bikini this Summer. Most likely a way to frugally hold on to the last food reserves left during a long winter, I suppose.
But before Lent we have Mardi Gras, which we celebrate with a Carnival (not the same as in New Orleans, no beads) and also La Chandeleur, hereafter renamed National Crêpe Holiday.
What do we do? We cook crêpes, pardi! There's a bit of a complicated ritual where you are supposed to hold a gold coin in your left hand while you flip the crêpes over the skillet with your right hand, all the while letting a candle burn (hence the name) but I've never seen anyone do this ever. Maybe because gold coins have all but disappeared a long, long time before L'Euro replaced our beloved francs.

Anyway, tomorrow is La Chandeleur, so FBC! hereby grants you license to go out and eat crêpes at your favorite place, or even better! Make your own! The recipe follows. Nota Bene: if you want to do savory crêpes, please be aware that they are in fact called galettes, are made with buckwheat flour and water, not milk. FBC! always lamentably failed in her attempts to make galettes, which is only natural as I'm from Normandy and galettes are made by our nefarious neighbors, the Bretons from Brittany (to you, evil Bretons, one last time and for all: the Mont Saint-Michel is in Normandy!)
Crêpe Batter:
400g Flour (King Arthur white flour)
1 liter milk (Broguiere or Strauss, 2% fat)
3 eggs
1 large tablespoon oil (Canola or Cornflower)
1 pinch salt
choice or either orange blossom water, rose water, rum, vanilla extract, Cointreau or Grand Marnier (optional, don't do it if you plan to use the batter for savory crêpes)


In a large, but very large bowl, pour the flour in a little heap, dig a depression on top. Crack the 3 eggs in the depression, add the tablespoon of oil, the pinch of salt and a tiny bit of milk. It looks a little bit like the top of a volcano with a lake.
With a fork, start stirring and mixing all the wet ingredients together and gradually incorporate the flour that sits around the slopes of the volcano (and have a thought for Pliny The Elder).
You should get a oatmeal-thick type of mixture, with the flour in its normal floury state around. The trick is to pour a bit of milk gradually and keep on stirring, to incorporate the sides of the flour until most of the milk is incorporated and the batter looks like waffle batter or a thinnish pancake batter. In case your have lumps in your batter, don't panic! You can use a hand-held mixer to smooth everything in, including the flavoring you can now add.
Since you've been reading up until here, I can reveal it to you know: you can actually use your mixer from the start to prepare the batter, even use a kitchenaid, but it's not as much fun. I concede it is faster, though.

And now what? Now you put your lovely batter in its covered bowl in your fridge, and you forget it for the next few hours. Go on a date, get plastered with your best friends, go volunteer at a homeless shelter, forget about the Super Bowl and think about America before you vote. The longest you let your batter rest, the better it will be. But don't try to read Kant's Critique Of Pure Reason because your batter will be moldy by the time you finish.
Fast-forward to crêpes-cooking time. You imperatively need to use a non-stick skillet. It's OK if it is not a crêpière-type of skillet, but it has to be non-stick, and you'd better have gas burners.
Anyway, take your batter out of the fridge, stir well. If it is a bit thick you can add a bit of water to thin it out.
Wash a small, waxy potato, cut it in halves, dump some bland-tasting oil (canola) in a small ramekin. Pick a fork on the curved side of your potato half, dip the flat (cut side) in the oil, and use your rudimentary oil-spreading tool to grease your skillet(s) that you wisely pre-heated on moderate heat for a few minutes.

Once your skillet is hot enough, pour in between a half-ladle to a ladle-full of batter in the center of your skillet, and spread the batter all around by gracefully moving the skillet left, right, anyway you like for its surface to be covered in batter. No, you don't need that cute wooden spreading tools from Brittany, so no need to do some last-minute, frantic online shopping.
Wait for the underside of your crêpe to be cooked (the edges will start to unpeel themselves naturally from the sides of the skillet) then use a wooden curved spatula (that one you truly need, believe me) to flip it over and cook the second side. It takes roughly 2 minutes for the first side to be cooked, and 1 minute for the second.
Voilà, your first crêpe is cooked! Oh, I forgot to tell you: the first one is always, always an utter failure: the skillet is too hot, or not hot enough, the crêpe doesn't flip over well, you poured too much batter, not enough, etc. Don't despair, it takes a few attempts to get the hang of it, and even I who has made crêpes since I was 8, I usually screw up the first 2 or 3 ones.

Where was I? Oh yes, your first successful crêpe is cooked! Well, you can now depose delicately your warm crêpe on a plate, and spread whatever you want on it. My favorite is very simple: sprinkle a bit of sugar and pour a bit of lemon juice on top. Fold your spread-covered crêpe in half, then fold this half in another half and you get a nice triangular-shaped, yummy-filled crêpe.
Other fillings can be: whatever preserve you like, or some sliced bananas with: a) Nutella, b) whipped cream, c) toasted sliced almonds, d) all of the above, or some caramel au beurre salé , just some Nutella, a bit of butter with some sugar, some lemon curd, some candied chestnut purée, some apple slices cooked in butter, any kind of fruit with or without whipped cream, etc.


If you wish to eat a savory version using the recipe above, omit the flavoring in the batter, and spread the already cooked top of your flipped crêpe while the bottom half is cooking, with any combination of the following: some diced ham, cooked and sliced mushroom, cooked spinach, grated cheese and crème fraîche, and maybe sprinkle a pinch of nutmeg on top. Fold your crêpe in half with its filling while everything is in the skillet and lower the heat a little bit to let the filling warm up, fold it a second time in a quarter. If you are skillful you can flip the folded-in-half crêpe in the skillet to make sure the filling is evenly spread out and warm, before folding it into a quarter and serving it. It will ensure that there isn't a portion of the crêpe that's more cooked (or burnt!) than the other.

Enjoy, and don't forget to help save Spiral Jetty: the deadline to write/phone is has been extended to February 13!