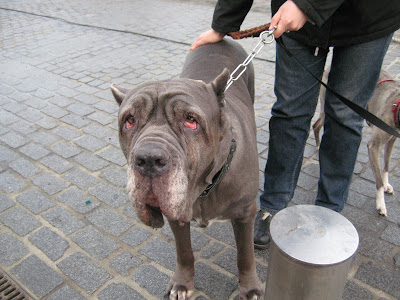 First of all, thanks for the people who showed me support, especially the far away ones. I know it's just a car and it's just money, but it has been terribly upsetting. I've had lots of personal travails over the last few years, and that one proved to be the last straw. So thanks to Rita, Joseph, Analia, Mariah, Wendy, Martine, Ivan, Jose and Daniel. I see the poll is garnering some votes, so far I think you guys are too kind in choosing "an eternity of listening to Celine Dion songs", because what if the twats who stole and stripped my car like Celine Dion? I'm all for feeding them to the lions myself. Anyway, you have 3 more days to vote.

Anyway, I don't have much time to do art stuff this week (also going to a funeral tomorrow), so today's artworld shocker is Tom Krens stepping down from the Gugg. Do I care? No. Should you care? Well, unless you're a Gugg donor, I doubt it will drastically change your life, right? OK, so end of Tom Krens, and not too soon. My prognostic is they will shut down all satellites but Bilbao (Venice is a bit different). Will it make a difference? Well, the McDonaldization of art institutions has already done its damage (see: the Louvre in the AEU), so it's too late.

What else? Oh, BCAM. Still haven't seen it. Please read Vince Johnson's report below. I'll write about it after I see it, which will be after the Whitney. I kind of wanted to respond to Charlie Finch's ludicrous piece on artnet, but that would give Finch too much importance. Just want to rectify one thing: Mr. Finch, curators have the least power of decision in US Museums, regardless or these museums public or private funding. So if you've problem with what's shown in BCAM, and with the idea of BCAM itself you'd better address your criticism to LACMA's former and current directors, and also to the cheapness of LA donors. If they had give more money for expansion, Broad wouldn't have had free reign. Anyway, I cannot find the piece on the artnet site to link, so maybe it was so bad it's been removed.

I'm still in a crappy mood, as you can see, and mad I cannot really get around to see shows. So I won't announce anything this week, but the opening of the Walker-curated (Hi Philippe!) Kara Walker retrospective at the Hammer. Have fun and enjoy the art.