Your Social Life, back to normal! 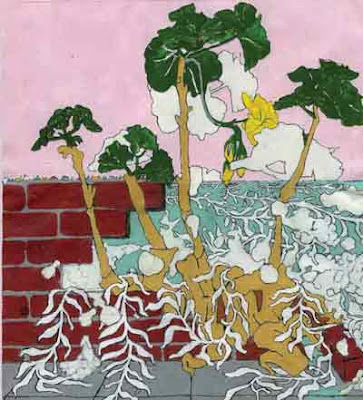 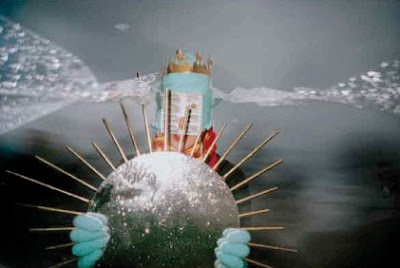 FBC! is back from a week heavy in social obligations, and filled with too much driving to spend much time in front of the laptop. A 2-part review is coming up, first part will be on the Broad Foundation annual brunch/new installation (I'm waiting for my friend to e-me the pix) and the second will be on BCAM at LACMA, that is after I see it. Which will be with the vulgus pecus on Sunday (note to my snobbish readers: vulgus pecus is Latin for *hoi polloi*), as my former colleagues neglected to put me on any list. Good! I won't refrain to say what like for fear of hurting their feelings.

Meanwhile, many things are happening in LA. For one, the end of the writers strike. I'm happy for them things are getting back to normal, and hope they will find work fast. I haven't followed the denouement lately nor asked my friends what they thought, so I'm not sure whether they got a fair deal or not. I only regret the missed opportunity by all the creative industries at large to explain the notion of residuals to a mainstream audience, because it concerns also musics, art, etc. When talking about the strike issues to my non-creative family and friends back home, I saw over and over again a look of sudden realization on their face, about their own Internet-stealing-pirating-downloading-appropriating ways.
No one is entirely innocent of it, but when faced with the notion that the creators loose a lot from the practice, most people realize that culture and entertainment have a cost, and result from someone else's hard work/job. I think the Industry-part of the entertainment sector should have used the opportunity to educate readers/viewers/etc. about why DRMs exist and how to share costs in a way that wouldn't be detrimental to the creative workforce only. And since these are thorny issues that should also concern the artworld, we would have been well-inspired to follow (appropriation, anyone?).

Anyway, best of luck to the writers, and on to the rest. This week in LA will see the launch of a new literary/arty magazine, Area Sneaks, put together by the husband-and-wife team of Joseph Mosconi and Rita Gonzalez, otherwise known as my very good pals. Rita G. is Da Best Curator in Town, and Joseph M. is an undercover writer doubling as a Tech Giant worker. Yours truly is not contributing to the current and first issue, but will do for the second one.
So for your pleasure, this Saturday come at LAXart for the launch/reading/performance. All the info you need is here.


What else has been happening in LA? Well, there's the Holy Quaterty of 1980s women artists showing all over town (Barbara Kruger, Jenny Holzer, Louise Lawler and Cindy Sherman), a project by West Of Rome, Emi Fontana's efforts about bringing art in non-traditional venues in Los Angeles. I haven't seen any of the art yet and cannot report fairly on it. From the website many of the works are re-actualizations of older works, the question being: are they still of consequence today, can they be recognized as such in the public sphere, etc.
You could also look at it another way and wonder why pieces chosen are historical/from an earlier era, if it is really about bringing back to the present an art that hasn't lost its urgency and its signification, or if it is a consequence of the contemporary art world ever-present ageism and its corollary stereotype. You know, "so and so have lost their mojo and their work was much better when they were young". Curators and collectors and critics are routinely guilty of it, something I always found tragic, neglecting great works by overlooked or underestimated artists.

West of Rome has been collaborating with art PR extraordinaire Bettina Korek for a while now, and in turn Bettina has produced a new brainchild, For Your Art. If you've been gallery-hoping recently you have seen the little leaflets with maps/listings of some carefully selected galleries and their programs.
In addition, For Your Art has also put out a website, which you can access via the link above, in its beta version. Its a good information hub about what's going on in LA, in a hip, trendy way (there's not much about alternative spaces and projects), but I am a bit disappointed by the content and/or the writing. There are a few writers posting short entries, but art critics they are not, and the style is vaguely hesitating between blog posts and PR/marketing style. Not a winning combination, and I'd suggest to keep the entries short and descriptive AND add a real review under the said entries, if possible by real writers and/or bloggers or critics. A case in point is the "BCAM Stillborn" entry, which could have been better expanded and developed. The author states: "it’ just not OK to let a billionaire tell his own version (or Larry Gagosian’s) of Contemporary Art History on county land", well my dear writer, please explain why at length, and expand about the County-not-doing-its-job part and what in the name of the culture has made such a thing happened, and what's the future of it. Mind you, the criticism in itself is bang on the money (pun totally intended), but lacks rigorous thinking and writing.
Also, it's difficult to understand the difference between the entries labeled "See" and the ones titled "Enjoy". But as it is a beta version, let's hope the site is going to improve and will become a good reference for what's happening in LA and maybe foster some decent art criticism in its wake.

In passing, I've been meaning forever to link to Andrew Bernardini's blog. Bernardini is an awfully young writer (and it sometimes shows) but he's very accomplished. I trust he will do great things once he sheds all the critical theory Newspeak, and after he has the opportunity to go all over the world and look at tons of good art. He's doing just that, actually, but I think after he matures a bit he will be truly awesome, as opposed to promisingly brilliant. I'd love to see this guy go get a Ph.D. in art history and get a classical education on top of it, as I'm sure he would benefit from Von Schlosser, Aby Warburg and Carl Einstein. Anyway, even without this he's good, so please stop by his blog and enjoy.

Have fun in LA this week!

The 2 pictures above are in the upcoming #1 issue of Area Sneaks.
Posted by Frenchy but Chic! at 2:30 PM