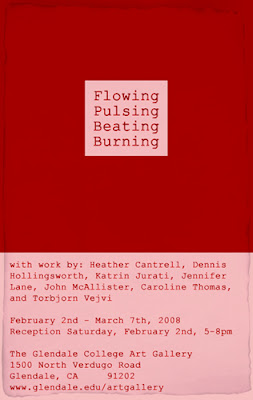 FBC! has been hibernating lately (all this rain, plus a nasty cold) and a bit out of it, so I neglected to help you out with this week Your Social Life. Oopsie.
So, quick, tonight you can go at Another Year In LA and don't worry about Friday night's traffic, because their openings run late. I won't be able to go, so please say hi to David and Cathy for me. Thanks!
Tomorrow is also the opening of the show curated by Michael Ned Holte at Richard Telles, where I will be absent from due to a previous social engagement, so once again please say hi to the charming Will Fowler for me! And after this? Well, you can go see the last days of the Francis Alys show at the Hammer or the Murakami show at MoCA and most importantly swing by the Glendale College Gallery for tomorrow's opening (look for Jennifer Lane and Caroline Thomas' work).
You can also go see the show Patriot Acts at 18th St. in Santa Monica. I'm fully disqualified to review that show since I have 5 friends in it, not including the curator, but before you go vote on Super Tuesday it would probably benefit you to have a refresher in what's great about American's values, when they are cherished and respected.

Next week you will have to brace for the upcoming mammoth opening of BCAM at LACMA. For the non-acronymous readers, all those initials stand for Broad Contemporary Art Museum at the Los Angeles County Museum of Art, a mouthful isn't it? You may have seen the Jeff Koons-hatched egg plastered on banners all over town. Koons being championed by Broad in many, many of his gigantic-sized endeavors, the trademark may have seemed obvious to LACMA's Marketing Dept. but I'm afraid not so much for the rest of the city. Now you know!
Anyway, there will be a series of grandiose shindigs starting with the Gala fundraiser and then a series of openings, none of which your truly has been invited to, so I'm a bit peeved at my former LACMA colleagues. That's OK, I will report on the building and the collection once the commotion will have died down. I think I'll contrast it with the Michael Asher show at SMMOA (yay!) and then later will post the LA-provincial-versus-international text I've been working on and off for the past weeks. So if like me you are not invited, you can 1.) but the LAT Sunday, there's a 6-page spread coming up and 2.) get a free community ticket for the Feb. 16/17 weekend (I'm going at 2 PM, if you really want to know, but if there are too many people in attendance I'll flee).

Meanwhile, there's also the brunch at the Broad Foundation to present the new installation there, and I'm very excited to go because there's a Jeff Wall that must be new there, and there will be solid good stuff like Bernd and Hilla Becher, Thomas Struth and Pierre Huygues.
To the best of my knowledge there isn't any Jeff Wall in Los Angeles' public collections, so hopefully it will trigger some desire in collectors here to buy a good one and donate it to an institution here.
I personally don't care (admittedly, I'm not a Museum Director) whether Eli Broad gives or not his collection to LACMA or any other LA museum at the moment, because:

a) he never said he was going to give it, before, during, and after the construction and opening of BCAM (hey, NYT article from a few weeks back: this is not news. The info was out and public for I don't know how long!)
b) he may change his mind later
c) even if he doesn't, the Foundation that will administer the collection may decide to donate it in parts or in its entirety in the future
d) Eli Broad isn't dead, in case you haven't noticed. If you hadn't, you probably live on Mars. Since he's very much alive, he can do as he may well please.
e) The building is great, and if it leads LA donors to pledge more money in the future to totally renovate and rebuild LACMA from scratch it would be a good idea (but please, preserve the Bing Auditorium as is).


And seriously: why is it that Eli Broad can do pretty much as he pleases in LA? It's very simple: no one else is stepping in. Where are you all the other LA billionaires when you are needed? How much do you donate to Los Angeles civic projects? To the Los Angeles public good at large? Probably not enough. Until you do, Eli reigns.
Posted by Frenchy but Chic! at 5:20 PM