My Trip To BCAM by artist Vincent Johnson 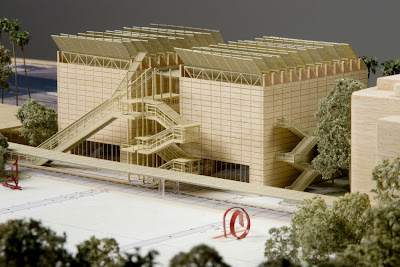 After the delightful Annie Oelschlager, FBC! is overjoyed to introduce a new contributor, the LA-based artist Vincent Johnson. You can currently see Vince's work in Santa Monica at the Patriot Acts show, or look online a past show at LAXart.
Meanwhile, Vince was kind enough to send me an email about his BCAM visit and let me publish it here. Here are his comments after seeing BCAM and reading about it in various newspapers and online magazines.

"Upon entry into BCAM through its 3rd (top floor) galleries, I feel that the current show is far too narrowly focused on New York in the 1980's. The opening show should have been a celebration of the art made in California since the 1950's to the present. I do see a positive reason for this part of the show - especially the Koons pieces - as most of LA would not have seen this work, unless they flew to NYC regularly, since it comes out of NYC gallery shows from the late 70's through the mid-1980's before it became a part of contemporary art history.

If this exhibition were in NYC in a museum context, it would not be well received, for the reasons I have already described. This is more like a show that the Houston or Seattle or Portland artworlds need to see than the LA artworld. I am stunned to not see California video art as a apart of this show.

Where are the surprise gems that Broad collected that do not come out of this moment of contemporary art history?

If there was an interest in fully portraying the NYC artworld of 1977-1986, there is a huge amount missing, especially the German painters Sigmar Polke and Anselm Kiefer, both of whom were as inportant at that time to the NYC artworld as Schnabel, Fischl, Salle, Goldstein, Sherman, et al. I know this because I was living in NYC during this time and visiting it often when not living there, before coming to California in 1986. The Holzer's are from after the 1977-86 period, which is odd, since her artistic formation occurs at that time, and the electronic signboards and carved stools come much after her straight to the point small text pieces that were scattered throughout NYC on mostly urban, but not museum surfaces.

The Serra is phenomenal on the first floor, but there is still not enough room to view the piece from distance. Same goes for the Tony Smith at the bottom of the staircase in one of the other galleries.

I wonder if the BCAM space will ever be used to house a permanent collection. It seems perfect for traveling shows, but does not have the jewel boxes that one finds in permanent collections, such as what already exists at the Art institute of Chicago, (their Joseph Cornell rooms are incredible, for example). The AIC is building a Modern Art Wing that opens next year. Like BCAM, it is also designed by Renzo Piano, but the Modern Wing's budget is 373 million dollars, as versus 56 million dollars for BCAM.

The Art Institute of Chicago says that it has the third most important collection of Modern Art in the world, behind only MOMA and the Pompidou. Even if Broad donated his entire collection to LACMA, this would not cause LACMA's Modern collection to be ranked anywhere near the other museums I've just mentioned.

So again, if it is MOMA and now The Art Institute of Chicago that will be the home to the study of Modernism in this country, what role does LACMA's BCAM actualy play besides being a showcase like the Martin Gropius Bau in Berlin?

Lastly, BCAM shows that LACMA should be torn down and built anew from scratch. There are too many competing interests represented, and the museum overall has the feeling of being more disjointed than ever, as one moved from the luxurious to the unfortunate and embarrassing spaces in the museum.

The Financial Times of London has the best observations about BCAM I've read online.

The NYTimes does not hate all of LA. When the Disney Concert Hall opened it was hailed by them as the best symphony in the best concert hall in America. But it does expect LA to play ball at the world stage standard in the field of visual art, to match its standing as a center of art production."

Picture of Renzo Piano's BCAM model via this site.