Your Social Life, At Home Only In The Next 2 Weeks 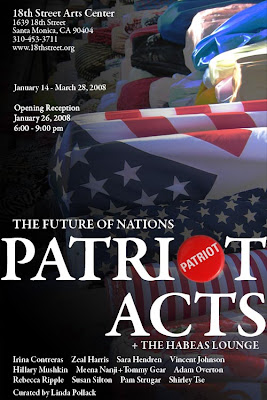 FBC! is back in town and somewhat ready to get back into the groove! Still suffering from art world burnout but trying to get over it, yeepee!

So this week is the kickoff for Photo LA, the Los Angeles photo-centric art fair, as its name indicate. LA is trying to become an art hub with no less than 3 art fairs in January, including the usually boring Los Angeles Art Show, and the upcoming Art LA 2008. These last two will be held roughly at the same moment in about 2 weeks from now. The only one that's really interesting, IMHO, is Photo LA. Check out their program as they present a series of talks and lectures on Saturday that's pretty interesting, including the Charlie White-Jeff Burton one.

I have a feeling the LA Art Show days are numbered, because it mostly includes secondary market galleries, though this year they are joined by the LA Fine Print Fair. I'd rather spend money on a good print than a bad painting, and I remember seeing gems like a very fine Rembrandt self-portrait (an etching I think) 2 years ago that was cheaper than most crappy painting you will fine at Art LA 2008. Well, it still won't come cheap but if I had $15,000 to $20,000 to spend on something I'd get that my Rembrandt etching over anything else. Or I'd go shop at Photo LA!

The only good thing about Art LA is you get to schmooze in a relaxed atmosphere, it is more a friendly neighborhood event than a horrible coke-fueled art world shindig. At least it was last year, and it didn't have any would-be-glamorous party attached (that I knew of). The art, well it's pretty much what you see in LA on any given day, since most galleries are local. Some of my favorite ones are there, so if you insist on going shopping say hi them for me. As FBC! devotees you know which ones they are!

Now this being said I suppose most of you will spend some time in Santa Monica in the next 2 weeks or so. If you happen to go to the Photo LA bash tonight and want to meet FBC! in person, look for a diminutive orange mushroom. I should be easy to spot! You probably won't find me at either the LA Art Show or Art LA, BUT you will for sure find me at the opening party for Patriot Acts at 18th street art complex on the 26th (see image above). It features such luminaries as Vincent Johnson, Susan Stilton, Pam Strugar and Shirley Tse and is curated by Linda Pollack, all people I heppen to know and be friends with. The show truly opens this weekend, so you can see it on your way to Photo LA.

And while I'm speaking of friends and spaces I like, next week is the opening at LAXart of Scoli Acosta' show, with a walk-through by Rita Gonzalez, Da Best Curator In Town!
Posted by Frenchy but Chic! at 2:08 PM