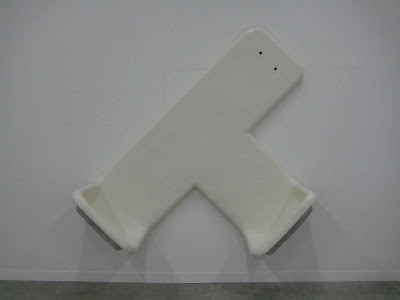 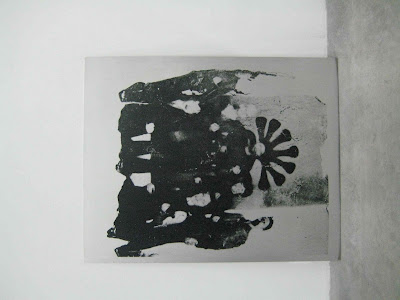 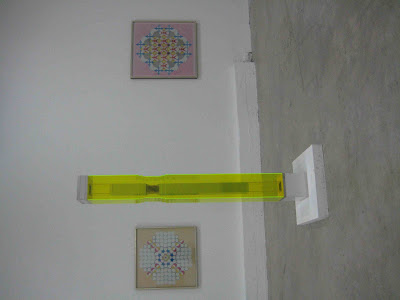 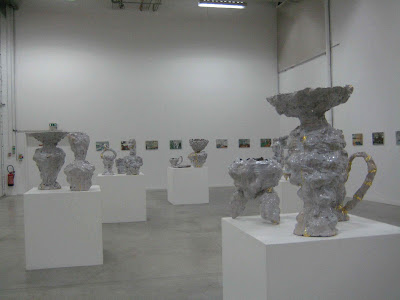 Hope you started the new year in a good state of mind, upcoming recession or not. FBC! has decided to try not to be too disillusioned with the artworld in 2008, or more accurately with whatever crap is touted as art these days as long as it is salable. Dammit! I've already broken my good resolutions. Oh, well.

Let's try a bit. When I was back home last month I had very little time for exhibition-visiting, mostly because I was in my boring hometown where there's no art. While in Paris I mostly saw my friends, which meant I only had about 3 hours to devote to see art. I therefore decided to go visit the former Musée des Monuments Français now re-baptized Cité de l'Architecture et du Patrimoine. I'll post about it separately.
Very close to it is the Palais de Tokyo, and that's where I went to see the only contemporary art show I could catch. There was nothing too attractive at the Pompidou (Giacometti's studio, the typical French blockbuster exhibition aimed at the geriatric bourgeois crowd), the Plateau was too far out of the area where I was staying and I wanted

to see a group show, as opposed to the solo shows at the ARC.
Many friends had also asked my opinion about the show at the Palais de Tokyo before I went there, so I obligingly decided to visit it so i could post later about it.

The good thing about the Palais de Tokyo is you are allowed to take pictures, even though almost all the artists exhibited are alive and could decide to hold on to their copyrights.
It is the last generous institution in that respect. By contrast, at the Cité de l'Architecture et du Patrimoine, where: a) nothing exhibited is made by an artist and b) none of the originators of whatever is exhibited is alive (indeed most of them have been dead for centuries), it is not allowed to take any picture and the order is strictly enforced.
So I got triggered happy at PdT and shot the entire exhibition, but since I can only post 4 pictures with that idiot Blogger template I'll probably post a few more separately.

Anyway, off I went to see The Third Mind, a title borrowed to William Burrough and Brion Gysin by Ugo Rondinone, the curator of the show. I'm linking to vernissagetv as they provide the press release and several links that are useful for the curious reader.
Suffice for you to know that Ugo Rondinone is a Swiss artist, a nationality he shares with the director of the Palais de Tokyo. There's a distinctive Swiss flavor to the programming, with Swiss artists, Swiss-originated exhibitions and Swiss guest curators all being presented/showing at PdT, to the point that they should import back Obrist too to make the Swiss aspect more complete. I haven't checked if they serve Swiss cheeses and Swiss chocolate at the restaurant, but I wouldn't be surprised if they did.

The press release for the show is a total absurdity (you know, the artist-as-curator-presenting-an-exhibition-that-is-an-artwork-in-itself: sooooooo early 1990s!), with no other binding component than the personality and taste of the curator. Which is not unique or even bad in itself, and many professional curators are as guilty of it as Rondinone. Just don't write a stupid press release that's so full of clichés to legitimate your arbitrary choices, that's all I'm asking for. Thanks!
I think it is starting to be a little bit tired to ask artists to curate shows (I know Daniel Buren would object, but I object to Daniel Buren myself), and a bit lazy from the part of museum directors. As if all artists had the aptitude to curate, or even the desire. Also, I think if you ask artists to curate then you should ask them to do it completely, not just make a selection of works or artists they like: they should raise the money, do the paperwork, negotiate loans, organize shipping and insurance, deal with the (unionized) installers, write and coordinate the catalogue, organize the opening and deal with the press. Not so fun, eh?
Anyway, I went to see the show without any undue expectations. I'm not a huge fan of Rondinone (I find his work uneven, but I do like some of it) but I was curious to see his choices, and the list of artists included a large bunch of people I like a lot. It meant that no matter what, there were things I was going to enjoy, even if the overall exhibition concept was...wait a minute, there was no concept, I forgot!

The entrance of the show wasn't very successful, with a spectacular Sarah Lucas smashed car that's fairly typical of Brit art: spectacular, but empty. Hop to the right, and there was a series of monitors displaying a Warhol work with portraits of, among others, Duchamp, and some Bruce Conner. It was rather cacophonic.
But also emblematic of the overall spirit of the show: a slapdash juxtaposition of respected heavyweights (Warhol, Gober with super famous pieces) and fashionable stalwarts like Urs Fisher (I don't remember what he had shown), mixed with formerly unjustly-under-the-radar-but now-rediscovered-and/or-trendy artists (Lee Bontecou with two truly ugly pieces, alas, Jay DeFeo but also some very good Paul Thek), some mandatory figures you have seen everywhere over the last 7/8 years (Karen Kiliminik, Trisha Donnelly). In addition you could spot here and there the odd purely beautiful work drowned in that weird mixture (Vija Celmins), some outsider/abstract but hip art (Emma Kunz whom I believe was re-discovered in the 1990s in a show co-curated by Obrist but I'm not sure about it), stuff we've seen here in LA but that's not so well-known in Europe like Ronald Bladen (thanks Ann Goldstein!) or Bruce Conner.
In a way I felt like I was given a trendy demonstration or a lecture of a counter-art history of the last 20 years, something which might have been salutary, say in 2002, but comes a bit late now.

There was one truly atrocious room that epitomized what I abhor in today's art: it contained the extraordinary generic paintings of one Jean-Frederic Schnyder and the turd-like sculptures of Andrew Lord. Schnyder's paintings are poorly executed, acrylic figurative scenes of the type you see absolutely everywhere on any given day when you decide to go visit galleries that focus on painting (you know who you are), you know, inoffensive, salable, forgettable without breadth, depth and ambition. Bland.
Several different types of turd-like sculptures were also scattered in the exhibition, including Rebecca Warren and Hans Josephsohn. Josephsohn's sculptures are typical of another trend, the one about re-discovering elder artists who were forgotten, but maybe for a good reason. Not all underground/underrated artists deserves to be unearthed, you know.
He and Schnyder are Swiss and maybe they have a personal relationship with Rondinone that explains their presence in the show, because there isn't any valid reason why they should be there otherwise. Obviously Josephsohn is here to forge a historical precedent to Lord and Warren (and to a lesser extend to the last master of useless ugly sculpture present in the show, Bruno Giroconli). There are also some formal resemblances/correspondences between their sculpture and the hip and likely to be forgotten paintings of Verne Dawson.
Other forgettable works includes Valentin Carron's giant crucifixes, Hugo Markl's collages, Nancy Grossman's mix of Bruce Nauman meets Haim Steinbach, etc.

Which was all very sad as some true gems were included: Joe Brainard's paintings/collages were very refreshing, and it was gratifying to see several very good Sue Williams. The Paul Thek/Emma Kunz room was outstanding, and the classic Robert Gober pieces were beautifully paired with Toba Khedoori. Both rooms don't reproduce very well in photography, unfortunately, as the Thek sculpture seem to overwhelm the Kunz drawings, and Khedoori's drawings are almost impossible to render on photography.
The always beautiful Vija Celmins was a little bit lost (to the point that I cannot remember where it was, I think in the vicinity of the Karen Kiliminik?). Which leads me to the fact that whatever the flaws of the exhibition, which I chose to view as Rondinone's secret history of art, I must emphasize how Rondinone underscored the leading position of women in his interpretation. 13 out of 32 artists, pretty good especially in France where true machismo still reigns in the artworld*.

And Rondinone did a public service in his exhibition which in my eyes entirely redeemed the whole artist-curating-his-alternate-history: he showed Cady Noland, the most immense artist of the 1990s, someone who is sorely missed now. For many reasons that belong only to herself Cady Noland stopped showing around 1995, even though she is still making work. Noland is the great legend of the art world, an outstanding, exemplary artist who was commenting accurately on the state of Western society in the 1990s through intelligent yet easy to comprehend works, without doing heavy propaganda, whose work was deeply feminist without being aggressively and simplistically so, who had understood and acknowledged the legacy of conceptual art by being clear but not dry and boring. It also made clever use of the violent, alternative history of contemporary America (SLA, Lee Harvey Oswald) via its counter-culture, giving an alternative history lesson that was salutary in the post-Reagan, post Bush Senior era.
So, thank you Ugo Rondinone for bringing her back and making available a work that is too rare nowadays. Let's hope it will inspire young artist, and that Cady Noland will feel like showing again sometimes soon. Cady, we've been missing you. Please come back. Art is boring and useless without you.

*In the late 1990s a well-known French curator/art official told me I should get married so I would a) leave art world jobs to men and b) would be taken care of financially. Bonus points if you find out who it was! I promise to get you either A Room Of One's Own or any Luce Irrigaray of your own choosing, though I think Virginie Despentes is more fun to read.