When My Head Tinkers With Tradition 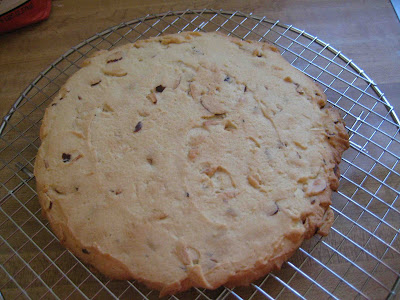 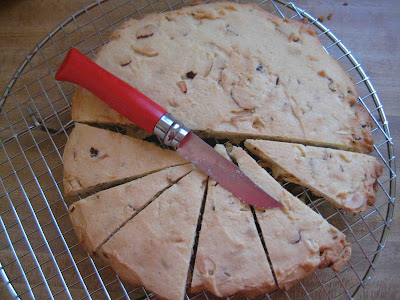 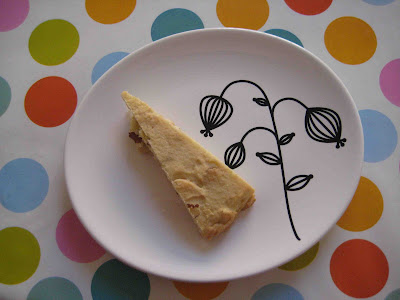 Yesterday and for a large part of today, FBC! was rather unwell. Like 10% of the population, FBC! suffers from debilitating migraines, and eats painkillers and triptans accordingly*.
Usually when in this state, depending on if/how medications work, I can either:

a) be good for nothing but resting in the dark.
or
b) be slightly better, which means no nausea, I can actually stand up and open my eyes but boy, how my f*&%?!!! head hurts. If people call me while in this state, I can actually utter a few words, even in English, but don't ask me to be coherent.

I'm absolutely unable to read/write/do something that involves thinking when all of this happen, so I usually scratch Pomme's belly for a few hours, of I bake something. Pomme prefers if I do not bake, understandably, but after 3 hours of the activity I grow insanely jealous of her obscene expression of beatific contentment. So I bake.
Baking is very comforting to me, it involves no intense brain activity, and for some reason I always crave sweets after severe migraines. There's a caveat, that is I cannot do labor-intensive, sophisticated or inventive baking and I cannot listen to music while I bake or it hurts too much, however tempting it would be to listen to Morphine's Cure For Pain.

So yesterday I decided to do something simple with whatever was stocked in my pantry. I wanted to do a thing that's very traditional in the West of France, a Sablé. In Normandy where I come from these small shortbread-type cookies are ubiquitous. Unlike shortbread though they contain eggs. If you want to try some, you can occasionally find them at CostPlus and seasonally at Surfas. They taste buttery, very fresh and they tend to be slightly crumbly and crunchy rather than melt-in-your-mouth soft. But yesterday, I was too unwell to try to roll out some pastry and then cut out circles, so I decided to do a gigantic Sablé instead, and a rustic one to boot. I knew that to make a big one I needed to do a different recipe than the ones from my region, so I settled for a Broyé du Poitou, and when I started to look for a recipe on Internet I found a totally fiddled-with-tradition-one. I decided to be even more totally unorthodox myself since I didn't have enough butter and the wrong type of almonds (in the traditional recipe, there are no almonds at all). I divided the proportions in 2, didn't roll out the dough, etc.
As usual I use metrics for my recipes. You can find cheap kitchen scales graded in grammes at places like Sur La Table, but also on line. If you decide to fiddle with the recipe itself, you simply needs to know it is based on tarte dough, and as all tarte doughs you need to make sure your butter quantity is half the weight of the flour. You can fiddle with the sugar, add an egg if you double the quantity of flour, but always, always make sure that butter= 1/2 flour.

OK, here's the recipe:
Prewarm your oven at 180C, that is 375 to 400F (my oven is a wonderful antique but not very precise), and for my Euro readers it's good old Thermostat 6.

You will need:
250g flour (I use King Arthur white, unbleached flour)
125g butter (I used Kerrygold from TJ but if you can find Isigny Sainte Mère butter, at the aforementioned Surfas or the Jons supermarket in Hollywood it's better. I always use sweet butter.)
125g white sugar
1 egg
2 very generous tablespoons of great booze: brandy, scotch, calvados (I used some leftover Dalwhinnie that is awesome)
50g almonds. I had some slivered blanched almonds and some sliced ones, which I toasted together for about a minute in a non-stick skillet.

OK, so here's the lazy migraineuse's way of doing it:
With an electric mixer, beat the sugar, egg and booze together. Add the butter, softened at room temperature and cut into small cubes, mix well until well blended. You should get a liquid-y batter. Dump the flour in your bowl, and mix it slowly to the previous mixture until it forms some dough. You know how dough looks like, right? Then you can add the toasted almonds and mix them evenly to the dough.

Anyway, here I should have rolled the dough to a perfect circle and put it on parchment paper on a cookie sheet. Well, I couldn't be bothered, so I simply dumped it in a greased and flour tarte pan (an aluminum one that's a family heirloom), pressed it and leveled the top with a knife. It has to be thick, about 1,5 centimeters. Put everything in the oven, and 35 minutes later, tin lin lin ! as we say in French, a giant cookie!
It's good warm, or cold, and can be eaten with tea, coffee, single malt scotch or even Bailey's. But don't ruin it with milk, OK?
So you see, biblical simplicity, maximum rewardability. Merci qui? Merci Frenchy!

*By the way, if I could award a Nobel prize to the genius who discovered the triptans, I would, and I'm going to give some free publicity to the type of Zomig tablet that dissolves on the tongue. Pure genius.
Posted by Frenchy but Chic! at 8:34 PM