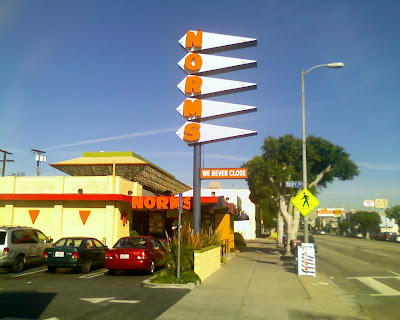 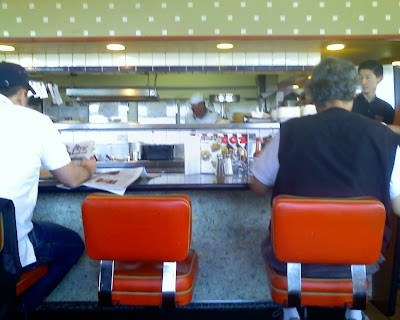 You Edward Ruscha fans of course all know his 1964 masterpiece, The Los Angeles County Museum On Fire, currently (and probably forever) hanging at the Hirshhorn in DC. It has a lesser-known little brother (or sister, depending on which side of the Gorilla Grrls you're standing on) called Norms, La Cienega on Fire, belonging to the Broad Art Foundation.
It depicts a defunct La Cienega branch of what was a classical googie-architecture diner on fire, as its title indicates. There is still one Norms on Pico boulevard, well-known for being open 24-hour and serving cheap (but alas, not very good) breakfasts.
So it was only fitting that after the post-BCAM opening extravaganza brunch at the Broad Art Foundation, my pal Daniel and I stopped at the real Norms for a (sub-standard) meal. I felt like entering an Edward Ruscha painting to discover inside a Dan Graham photograph (see pictures above).

Your truly hasn't seen BCAM yet and is waiting for a bit of the madness to calm down before getting there so there will be a couple of weeks before I can post veni, vedi, scripsi*. In the meantime I'm having artist Vincent Johnson give us his opinion in a subsequent post.
Anyway, before seeing LACMA getting flamed over Eli Broad and his collection and his new building there as in the Ruscha painting, Daniel and I headed over to the Broad Brunch in sunny Santa Monica. Every year there's a bash to celebrate the new installation of the collection showcasing some of the new acquisitions. So, ground floor: all Andreas Gursky. Not my cup of tea, you give me Thomas Ruff any day instead, but I've always liked his 99cents store picture (so LA!). There are a couple early photographs in the pure hardcore, post Bernd & Hilla Becher style installed at the Broad that really show how Gursky was talented if derivative before going all commercial in his photoshop-retouched monumental arrangements. The Becher were presents in the installation, as was Struth on a different floor with some continuation of his "museum viewers" series. I didn't see any Ruff though.

Upstairs, in a combination of floors I don't remember were Pierre Huyghe's phenomenal video "A Journey That Wasn't", another artist whose name escapes me at the moment (but I know I don't like the work. Tansey maybe?), Franz Ackerman in a weird installation-cum-painting that is somewhat recent (I'm not a huge fan either) shown with Neo Rauch, an artist who is so overrated and clearly destined to be a forgotten little master in a century or so. Some good Albert Oehlens, Christopher Wool ditto, a bunch of Ellen Gallhager (an artist who can look good in group shows but I'm not sure her work really stands alone, I'd rather get Sue Williams myself), shown with William Kentridge, an artist I am not sure deserves all the veneration he gets. I mean, it's nice, but...
There was also a very good recent Jeff Wall, alas not very well installed. I mean, if Andreas Gursky whose work wouldn't even exist without Jeff Wall gets an entire floor, at least Wall's work should get better placement. I'm glad Wall finally enters Broad's collection any way, though I doubt Broad will be able to collect Wall in depth as works by the artists are rare on the market.

The event itself was rather relaxed, FBC! being thrilled to meet Jeff Wall in person, as well as his lovely (and extremely funny) wife Jeanette. FBC! counts Wall amongst her private Gods, another one being Dan Graham, so it totally made my day (and yes, I've made Dan Graham in the past).
There were a bunch of LACMA people present of course, Michael Govan and Melody Kanschat in full schmoozing mode with smiled glued on their faces. Marian Goodman was here with her son Michael. Marian Goodman was very nice in person, and also shorter than FBC!, something very rare in the artworld (and probably elsewhere) so I felt like mentioning it. Aside from our short stature she and I also share a taste for colorful designer glasses, so maybe if I'm lucky the resemblance won't stop here and I'll end up as the Marian Goodman of the 2030s. One can always hope... In passing, if you're in NYC this Saturday, there's a new Jeff Wall show opening at Marian Goodman.
It seems I've also shaken Tyler Green's hand but if it was so it was at the end when I was developing a headache so I don't remember it and I probably didn't introduce myself as FBC!. Sorry Mr. Green, another time maybe.
Anyway, FBC! isn't artforum.com so I'll stop here with the name-dropping. Have a nice end of President Day, and be careful when you elect the next one.

* My Latin is becoming shaky, so scripsi it may not be.
**pictures are copyright Daniel Congdon, 2008. Daniel is an artist, so please don't repost/publish before contacting FBC! for permission and without mentioning the author. Thanks!
Posted by Frenchy but Chic! at 9:16 PM

Norms on La Cienega has not closed; it is perhaps the chain's best known location. It is one of the last remaining googie coffee shops in LA. The other is Pann's on La Tijera.