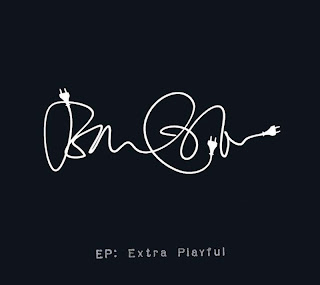 John Cale's EP Extra Playful has been out for a couple of months now, and in November the US has been graced with a Black Friday edition containing a couple of bonus tracks. Of course we had to procure one copy at the FBC! headquarters, with a bit of trepidation since I wasn't really fond of the new songs when I heard them live or on YouTube. Lesson learned, one shouldn't rely on live videos posted by concert attendees nor on one live iteration to judge music, but wait for the official recorded version to come out.

Extra Playful comes with 5 songs, Catastrofuk, Whaddya Mean By That, Hey Ray, Pile à l'Heure and Perfection, plus Bluetooth Swing and The Hanging if you managed to lay your hands on the Black Friday issue, which I STRONGLY recommend you do. With all 7 songs you almost get a full-length album, and one that augurs really well for Cale's upcoming 2012 LP.

The opening line of the fist song "it's catastrophic, how the money goes" will have a strong resonance for everybody but maybe the 1% . On the other hand,  "you can't take it when you go" is directly addressed to them, I guess - that is, if the 1% had musical taste. Judging by what they buy in art, I strongly doubt it's the case. It's a solid rocker that has lots of energy but lacks the subtlety and the elegance of Whaddya Mean, a very catchy song seemingly about love fights and subsequent sexual reconciliation. I really, but really disliked this last song when I heard it on stage, because I couldn't get over the opening lines "teach me how to love, teach me how to hate" which I found (and still find) incredibly weak.
But then all I had to do was wait for the chorus for the song to be stuck in my head for days on end. I find myself humming it to myself all the time now (but fear not, I only hum or sing when no one is around). You can watch the video clip below, but if I were you I'd just listen to the music without watching it because it's one of the most incredibly boring clips ever made, unlike Catastrofuk (scroll down to the bottom for the latter).  Catastrofuk  was directed by Cale's daughter and it's full of little visual inventions, lively and fun to watch. I hope in the future Cale will continue in this sympathetically nepotist trend and manage to get  his daughter to direct all his video clips. Whoever did the "Cale walking in a field with Instagram-like effects" below severely lacks imagination and should consider a career change in accounting or in the insurance business.

The next song on Extra Playful, Hey Ray, refers to the late Ray Johnson, an artist associated with Fluxus and credited with the invention of mail art. Aside from the postwar art reference that I would of course totally dig, it's a hell of a fun song, with back-up singers shouting out sentences variously related to the Cold War atmosphere "The Russians are coming" (to which Cale retorts "No they're not") or the British Invasion of the 60s (Cale: "not again!"), equating both menaces with the same level of bullshit. From what I've read on the Web it seems regular music critics who take themselves super seriously have trouble with this song, finding it "cringe-inducing" and labeling it "a lyrical misstep". To which I can only say: have you guys really listened to Loutallica? You want cringe-inducing, I give you Lady Gaga. Or Justin Bieber.

Apparently, if you're the unpredictable John Cale whose career has encompassed the musical avant-garde, the invention of alternative music, soundtrack composition, and pop jewels like Paris 1919 as well as the bleak masterpiece Music For A New Society, you're not allowed to have fun  even when you're almost 70, or else you're wont to disappoint  every normative, predictable music staff writer whose musical culture doesn't go back deeper than 5 years ago. Oh well, I guess one can't have everything.

The next song, Pile à l'Heure, was a bit disconcerting to me as it is sung in French,  with some electronic vocal effects that made the first couple of listen difficult to understand (someone told me it was via auto-tune. It's possible, I wouldn't know).
The title means "right on time" in colloquial French.  Cale had sung one super funny song in French before, Honi Soit on the eponymous album (hey, boring critics above, something tells me you never heard of this one. Or of Ski Patrol.), but unlike the perky Honi Soit,  Pile à L'Heure is a rather melancholic if vigorous electronic ballad. Cale explained somewhere that this song came from a soundtrack he was composing for a movie about dressage. That's when the lyrics started making sense to me, with sentences about someone dancing on a saddle, etc. I heard it live in mid-October and really liked it better then, because the live drumming  and the vocals sounded much warmer than the beats on the record (speaking of, hi Michael!). The very last song on the regular version of the EP, Perfection, speaks about someone trying to be desperately perfect, an attitude that inevitably leads to failure. It's also very catchy in a subdued, plaintive way, with once again a very strong chorus. Cale may be 69 going on 70,  but vigorous and inventive are really apt adjectives to describe his music.

If you got the Black Friday edition there are two more songs on it, Bluetooth Swings for which I unfortunately have no use whatsoever as it is for me the one song that is generically a filler, as if Cale felt contractually obligated to deliver a bonus he doesn't really believed in because he might not have had enough time to work on it; and The Hanging. The Hanging, in my opinion, is the true  masterpiece of the EP, with some particularly chiseled lyrics  - which seem to mix a historical imagery of medieval battles, of the revolt of the oppressed, which could  been interpreted as Cale being bullied as a kid and fighting against it,  or as  the current mass movements of revolt in the Middle East and the West (or maybe I'm just imagining a ton of bullshit because I'm in pain and on meds right now. Who cares? I particularly enjoyed the "haemorrhaging history" part, and so should you).
There is a truly beautiful and magnificent trumpet throughout, which reminded me of the great trombone solo during Graham Greene when Cale played Royce Hall last year.
It's no accident that the two most beautiful songs (Whaddya Mean By That? and The Hanging) on Extra Playful seem to deal with personal history, or at least to be inspired by personal events elevated to something more general.  I can't get enough of The Hanging even though the chorus goes "enough's enough", and that trumpet, my God. When was the last time you heard someone being truly innovative with a trumpet in pop music or rock'n'roll? Anybody else is working with great horn sections, these days? Maybe Brian Wilson for the forthcoming Beach Boy record next year?

The EP would be well worth buying just for The Hanging and then Whaddya Mean? as they float well above all the otherwise very solid and catchy songs. If the upcoming album is in this vein, I can't wait for it to be out, and I also hope they'll put The Hanging on it for everybody to enjoy*.


* If anybody in the Cale entourage ever read this and could convince the man that doing some new versions/arrangements/orchestrations of Empty Bottles and The Biggest, Loudest, Hairiest Group Of All  on a record one day was a fantastic idea, you would do a great service to humanity. Or something like that.