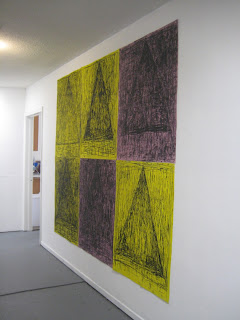 A couple of weeks ago I had the pleasure to see Mark Dutcher's very intelligent exhibition at Dental Rasta spelled backwards + umlaut (Latned Astär for those of you who, like me, would prefer if the place was really called Dental Rasta).  It's over now, so here are a few pictures for your viewing pleasure. 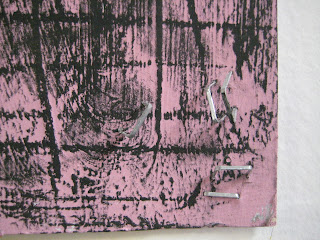 Mark Dutcher likes his surfaces rough and doesn't care for the preciousness of framing or anything that makes painting too remote and untouchable for the viewer. Many of the paintings and drawings in the show were on cardboard,  in this instance stapled directly to the wall. You could see this as just a textural effect, or if you're me as a social commentary on where art is at its most alive, i.e. in artist-run spaces outside of the commercial arenas where Artforum.com 'social diary would want make you to believe things happen. 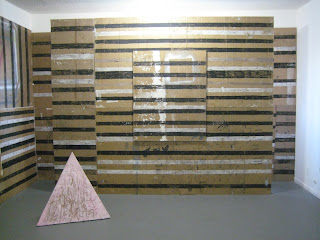 This is a frontal view of the first room. The large striped and layered piece in the back is made on cardboard packaging coming from Fine Art Stretcher Bars, on which are quite a few felt tip graffiti drawings and sentences made by artists Juan Capistran and Eamon Ore-Giron, so it's a collaborative piece, if you will, anchored in local Los Angeles art community practice. The layered humble material is here to counteract the outwardly minimalist aspect of the stripes, and the graffiti add a humorous take on Dutcher's careful meditation upon a modernist vocabulary that isn't so much quoted as simply dealt with a gritty series of painterly hand gestures.

Dutcher's work could at first glance seem deliberately abstract, but if you pay attention it rapidly emerges that he uses a lot of symbols, many of them with historical resonance such as the pink triangle the Nazis used to force homosexuals to wear,  and later on appropriated by Act-Up and the gay community during the heartbreaking years of the Aids epidemic. 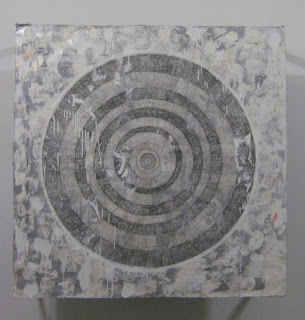 While Dutcher was working on the paintings and drawings of his exhibition, he was listening to a lot of music, including Joy Division's Decades whose chorus "Where Have They Been?" served as a reminder of all the loved ones lost to the Aids epidemic.  Some of the lyrics are inscribed on the wax paintings like this one. I tried to take a close-up but it came out all blurry, so you have to trust me on that one. 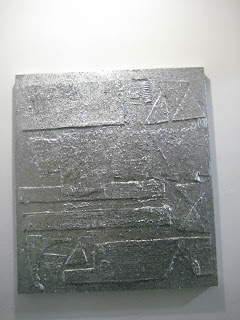 This last painting gives you an idea about the way Dutcher is interested in creating surface and texture variation in his paintings. I particularly like this one because under the sophisticated, unified silver layer of glitter you see those crude symbols made I suppose with either cardboard of construction paper, and the contradiction of the two processes make the final object look like a very ancient, primitive archeological artifact or like an extraterrestrial, indecipherable object sent to us by an advanced life form.
Posted by Frenchy but Chic! at 11:27 AM