A Is For Zebra - Charles White Elementary School 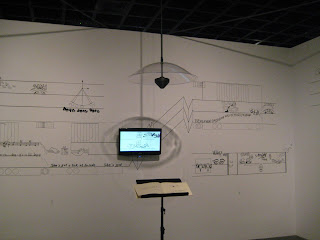 Stripsody, cartoon onomatopeas sung by Cathy Berberian
This Fall in Los Angeles, there's the mammoth series of exhibitions organized under the aegis of the Getty for Pacific Standard Times (PST), and there are all the other shows loosely disarranged under the imaginary heading "life continues". A pretty remarkable one such show right now, A Is For Zebra, was organized by José-Luis Blondet for LACMA at  the Charles White Elementary School near McArthur Park. 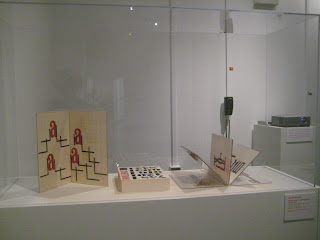 The exhibition is open to everybody but is really meant for the school children at CWE,  who were having a ball (and a great one at that!) during the opening. Where hot chocolate, cookies and ice cream sundaes were served, something LACMA should do at all their openings, I think (hint, hint).
How better to learn the joys of reading but to see how artists have been having fun with language and the alphabet, whether in videos, artist books, cartoon form, opera singing, experimental music, sculpture or installation? 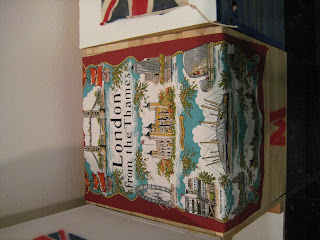 Stephanie Taylor devised a charming story based on a character whose name is derived from 'Los Angeles", and which by sound association becomes some absurd anglophile narrative*. Her installation featured several objects associated with London, and a soundtrack that I unfortunately didn't manage to hear (they were many children having the fun of their life there!) 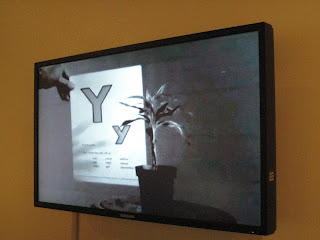 One of the great things in the partnership of LAUSD & LACMA for the school is how works from the permanent collection are being brought to the school. Here's John Baldessari How To Teach A Plant The Alphabet. Proof that conceptual art doesn't have to be dreadfully dry, it can be fun and playful, too. 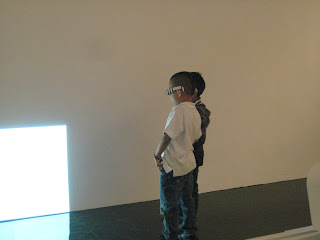 Because Charles White Elementary is located near McArthur Park, its students tend to be bilingual. A really fun thing in the show was that the didactics were printed in 2 colors, so to read them you had to wear a cool-looking pair of cardboard glasses with color-coded lenses, depending on whether you wanted to read them in English, Spanish, or both. Look how incredibly stylish these cute kids are wearing those glasses. It was really fun seeing kids alternating between 2 pairs of glasses to read both languages. 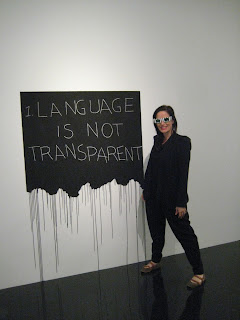 Stephanie Taylor in front of Mel Bochner's Language Is Not Transparent.
A Is For Zebra is a really fun show to take your children to if you have some, but even if you don't have any it's an interesting and intelligent exhibition to visit, with some incredible historical prints from LACMA's collection (Goya), in addition to the works shown above. And since the exhibition is meant for children to enjoy and have fun with, it's also not overwhelmingly dense. It's a nice alternative to the humongous PST shows if you wish to see some very good art but don't have the energy to tackle a gigantic museum historical exhibition.

*apologies for the picture being on its side. I have a new photo software that I don't master yet.
Posted by Frenchy but Chic! at 12:07 PM

Email ThisBlogThis!Share to TwitterShare to FacebookShare to Pinterest
Labels: A Is For Zebra, Charles White Elementary School