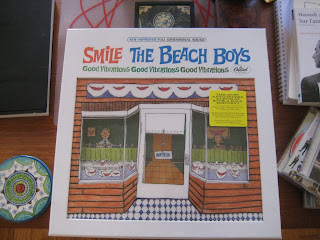 Among the many things to look forward to in 2012, aside from the incredibly shrinking, dwindling numbers of posts on FBC!, and  the upcoming mega-meta-recession-depression-explosion-implosion-end-of the world-we're-so fucked-and-maybe-the-plague-if-we're-lucky [just kidding. I wrote this to see if someone here was following], here are a few coming to my mind:

- some reflections on the Pacific Standard Times manifestations.  To whet your appetite, I'm globally positive about the whole shebang, but I haven't seen enough of the shows yet. Only concerns for me so far are: 1) quantity ain't quality  and 2) let's not rewrite too extensively art history as it didn't happen. I'm all for rediscovering some art/people, but there's a thin line between art, historical documentation, and social justice.

- This will likely be my very last year living in Los Angeles, for a while at least. So expect some non art-related, non-music related posts about what is so great about the city.

- We love old legends at FBC! and you know what? Next year, John Cale, Leonard Cohen and Scott Walker will all have a new album out. I just cannot wait. I also hope they will tour and preferably all play in Los Angeles while I still live here and can attend their shows.

- Speaking of touring: I'm told there are chances The Monochrome Set might tour the US next year, with dates in Los Angeles and New York. It depends on them getting their visas, which I hear are increasingly difficult and expensive for foreign musicians to get.  It's a shame because we're being deprived of great music, and it's not as if musicians were making much money outside of touring these days. I also hope that The Fall (whose new album Ersatz GB is out) could tour here, even though each time they did tour in the US some disaster ensued. Let's cross fingers that it won't be the case if they come play here in 2012.

- Second to almost last, but not least. The Beach Boys Smile box set (see picture above) is easily the greatest thing I've heard this year. It is otherworldly beautiful, such as that I cried when I first listened to it. If someone had told me one day I would be so moved by Pop Music I would have never believed it. If you used to think Pet Sounds was the best thing ever made, you won't believe how amazing Smile is. If you can't afford the box set, buy the double LP or the CDs now so you don't miss it in 2012. You won't regret it, and it would be a crying shame to miss it. You can buy it at Book Soup here in LA and I'm sure at most record stores, such as Amoeba (they did carry the John Cale Black Friday version of Extra Playful, worth calling them to see if they still have some copies).

- DID YOU HEAR THE SURVIVING BEACH BOYS WERE REUNITING NEXT YEAR WITH BRIAN WILSON??? They are. New album coming out (?) and new tour. This will likely be ruinous for us at the FBC! headquarters as I can foresee really expensive concert tickets (I'd think they would play the Hollywood Bowl, at least, if there's some logic left in this world), that plus all my favorite older musicians above, I can wave bye-bye to my savings.  This reunion could be really horrible or it could be truly great, but there's only one way to know, it's to see them play.

- And as a bonus, you know what's the truly greatest thing that will be happening in 2012? The Metallica- Lou Reed collaboration will be a thing of the past.

That's it for now, beloved and faithful readership. Have a great holiday season whatever the holiday you're celebrating, and a wonderful 2012. And, no matter what you do,  please don't hurt anybody.
Posted by Frenchy but Chic! at 4:15 PM

Email ThisBlogThis!Share to TwitterShare to FacebookShare to Pinterest
Labels: 2012 here I come