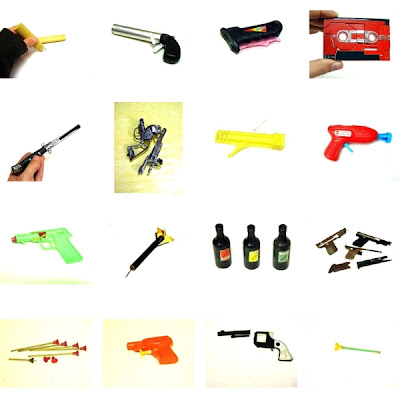 Howdy!
In my quest to do less art posts and more other stuff, here's some news (via Boing Boing)! If you're a gun owner, you're among the happiest people in the US! Isn't that unbelievable!
I think it's been scientifically proven by myself (let's take Obama out of it for one minute, OK?) that if you own a gun and are not a hunter/Olympic competitor you're probably a) a jerk, b) a moron and c) an irresponsible person and d) you may even own a SUV to boot.

While not all jerks/morons/irresponsible people are all in all happy (I know some moronic, irresponsible jerks SUV owners who are miserable), it's very likely they are a) more selfish, b) more self-centered, c) more self-absorbed than the rest of the population (i.e. nice, non-violent people). Egotistical egomaniacs, in one word, are not concerned with others' welfare, but more focused on their very own little self-interest (that may include their loved ones, it's still connected to their own self and not to the sense of preserving the whole community at large). So, yeah, if you don't care about others, you're more likely to be happier since other people's hardships, pain, grief and troubles are absolutely zero to you.

BUT, are you going to tell me, what if there's some truth in it? Would gun ownership make you happier? Would it automatically increases your chances to get tons of dates with hot chicks/studs, win the Mega Millions, build a McMansion, own a Back Painting by Frank Stella, or even have sex with Daniel Craig??? Should you buy a gun? And if so, what if you're scared, scared of firearms (like my own little Frenchy self)?
Not to worry, I have a solution: get yourself a toy gun that fires little flags, and customize your flags with "make love not war" slogans, put a rainbow flag on it, make them fire confetti petals and so forth. You will then leave the majority (64% of US households don't own guns, yay!) but will have found a peaceful, non-violent resolution to gun ownership.
Now, confidential to Obama: once you're President, please get Congress to pass a law to make my type of guns replace all the real ones around here. It will be more fun, and pretty!!!! And you will have the American people peacefully engaged in the pursuit of happiness. Fits with your Constitution, no?

Picture found here.
Posted by Frenchy but Chic! at 4:21 PM

Email ThisBlogThis!Share to TwitterShare to FacebookShare to Pinterest
Labels: I like America and America likes me, toy guns