Your Social Life At Home and Slightly Outside Of It Too 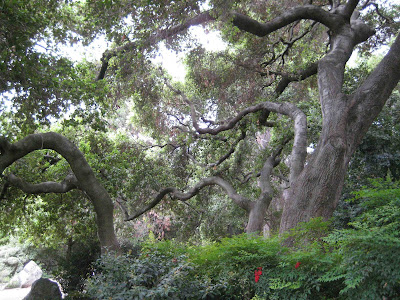 So I guess some of you are going on a gruesome trip to Indio (where the hell is that???) to attend Coachella. I'm so out of it I thought it was in June, so you see how old I am. Anyway, if you go, you're probably youngish, even though old foggie Prince and Über-old foggies Kraftwerk will be there, as well as a few French acts if you want to turn exotic (The Teenagers, Les Plasticines, Dimitri From Paris, Justice), as well as former Housemartins Norman (ex-Quentin) Cook a.k.a Fatboy Slim. And a bunch other stuff (Vampire Weekend, Death Cab For Cuties, The Bird And The Bee ) and I don't remember what else. I'm tired just thinking about it. Gosh, there's even the Verve, how symphonically boring is that?
Anyway, kiddies, don't forget the sunscreen and bottle water, OK?

So if you're a crusty grown up, or an art person, it's likely you're going to stay in town like me! And right you are, since Saturday will be the opening of Jonathan Herder at Daniel Weinberg, yeepee! 6 to 8 PM, bring your friends, children, grandmother, and that cute guy you met at your local happy hour, it will be grand. If you're at Coachella, send your BFF over 6150 Wilshire, your BFF's own BFF ('cause you know, it's rarely reciprocal), their Facebook pals (your Myspace ones are likely with you in Indio), your extended network as well as your six degree of separation, experiment or not. Jonathan Herder is THE opening to go to, the show you have to see and the art you should buy (and yes, he is a very good pal of FBC!).
Aside from Jon there's the Kaprow re-enactment of Fluids. I've already said everything I had to say about it, but I want to signal the part done at the Getty by the LA Art Girls (with the lovely Nancy Popp).
So this weekend will be spent in your car, since you should also go see the excellent Phantom Sightings show at LACMA (as well as the Ensor show curated by the current Wallis Annenberg Fellow, more about that later) AND go to Glendale if you haven't done so to see the Aram Moshayedi-curated exhibition.


If you want to try to re-enact a Cochella-like marathon, but transposed into the artworld, you can add the Kara Walker show at the Hammer to your busy weekend, as well as the Lawrence Weiner show at the Geffen. The good news is you will spend lots of time in your car, but you won't have to be covered in sunscreen from head to toe nor to mingle with smelly kids who are not allowed to drink yet (but they score, I guess).

You can hone your survivalist instincts, art-style, next Wednesday evening by foraging for fallen fruit in Silverlake with these cool people. I'll try to be there if I can combine it with a previous engagement.
Posted by Frenchy but Chic! at 11:03 PM