This Friday In Portland 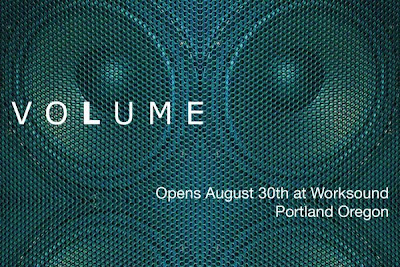 You can kick off your Labor Day weekend in Portland by visiting the exhibition Volume. I'm just copying the press release below (the html was lost in the transfer, so don't try to click on the underlined words, it won't work). If you go to the opening, please say hi to new Dad Salvatore Reda whose daughter Renee was born about 2 days ago, in time to let her Dad go install his work in the show. If Sal is bleary-eyed, you know why!


a survey of how Portland 's art scene addresses, redirects, abuses and redefines space (urban, institutional, outdoor, etc.)… as the city itself undergoes a transformation and a renegotiation of its spatial expectations
August 30-September 23
At Worksound 820 SE Alder
Opening August 30 7-9:30 PM, Also open First Friday September 5 7-9:00 PM
Regular Hours: Saturday & Sundays 12-5PM
Talk: September 23rd, 7:00PM Arun Jain Chief Urban Designer, City of Portland
Website: www.jeffjahn.com/VOLUME.htm
Contact: badvolcanogood@yahoo.com high res images available
artists:
Sean Healy, Nathan Shapiro, Joe Thurston, Salvatore Reda, Laura Fritz, Stephen Funk, Ellen George, Arcy Douglass, Jesse Hayward, Josh Smith, Adam Sorensen, Karl Burkheimer, Stephen Slappe, Damien Gilley, Stephanie Robison, Philippe Blanc
curated by Jeff Jahn
Curatorial notes:
Space defines, limits and expands our expectations for experience in both a physical and an intellectual sense and Portland ’s artists provide a unique lense on what can be done with and to space. In the past some have treated Portland like an unchanging Skinner Box but over the years I have argued that Portland’s artists are reshaping and redefining the city… pushing it to be more truly progressive and engaged in terms of its expectations for itself.
All of Volume’s artists articulate, inhabit and or redefine space as one of their primary concerns. In fact, Portland is so rich in spatially engaged art that the list of artists could easily have been 10 times as long… but we are going for a cohesive and challenging show not just some opportunity for ingratiation. This is my first non-institutional and independent show since 2005's Fresh Trouble, which featured China's Cao Fei. Everything in the past 3 years has been for the non-profit Organism or a University.
In contrast warehouse shows have certain informal but intensified cache because they are somewhat like dance off's where the participating artists show off new moves to eachother. The inclusion of several very established artists like Healy, George, Fritz and Thurston gives the younger artists a bit more to live up to and these kinds of mixers are a big part of why Portland's ever changing scene is so vital. New talent can gets a serious shake in PDX and that's why so many thousands have come here, changing the city in the process.
Posted by Frenchy but Chic! at 8:54 PM