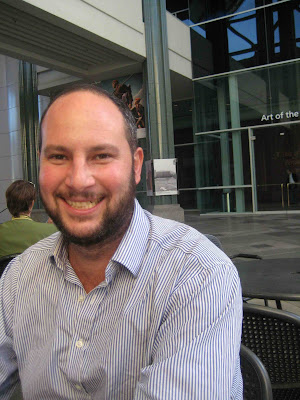 This week FBC! has been graced with the visit of Pablo Leon de la Barra, who's better known for the Centre for Aesthetic Revolution blog, the magazine he publishes, Pablo Internacional and the exhibitions he organizes with his other entity "White Cubicle Toilet Gallery" in London. In short, Pablo is loads of fun, and one of the nicest people in the art world.

We met with his partner David at LACMA, where they had been checking out the permanent collection, and we had coffee from the horrid coffee cart, after being ignominously chased from Pentimento (the fancy restaurant on the plazza) on the grounds that "the coffee at the cart was the same", which I can certify is absolutely untrue. It's way worse at the cart, even though the coffee at Pentimento itself cannot hope to ever be represented in the Most Fabulous Espresso Ever Worldwide Contest.
FBC! is happy to go on record with the assertion that the coffee cart at LACMA offers the worst espresso this side of Starbucks, and God knows how many bad espressos FBC! has had in Los Angeles in particular and in the United States in general*.

But it was OK because we joined the über-cool Stuart C. shortly after at Street, the newish restaurant on Highland and Melrose, where the food was pretty good (the décor, on another hand... but the service was lovely).
Yours truly had a white tea with rose something in it (it was just OK, not infused enough) and got some Turkish Donuts with rosehip jelly and cream that were awesome. I'm not sure they do donuts in Turkey, but these were really good. Light and not greasy.
Judging from my companions' reaction to their food, the various dumplings they had for starters were truly great, and their entrees very good. Can't say much more, I wasn't hungry so I didn't ask for a taste.
We all had a super secret conversation, of the kind that always remind me that whatever the art world other failings may be, it's still full of super interesting and great people. Sorry, can't share our confidential meeting minutes with you, but I can disclose that the part revolving around food came to the conclusion that:

- Church & State downtown is meh, and certainly as French as FBC! is a tall, leggy Swedish blonde.
- That Musso & Frank and The Pacific Dining Car are much beloved LA institutions, may they never close, and may they always retain their ancient staff. There waiters, bartenders, etc. are not allowed to retire or die, ever.
- Bottega Louie is a very solid place downtown
- Mo-ChiCa should be on everybody's "to try" list.
- British food can be extremely good if well-prepared (we were speaking traditional Brit. fare, not gastropubs)
-Pablo and David and Stuart should all come back very soon, as there are too many places to try. For example, Pablo and David need to do a thorough exploration of the San Gabriel Valley Chinese restaurants culture, followed with some research at Jitlada and Ruen Pair, etc.

It was tons of fun, and if you check Pablo's blog you can have a good idea of what he's been doing during his short stay in Los Angeles. Similarly, if you visit London soon, I can only recommend you check David's restaurant, Bistrotheque.
We shopped together for a few ingredients after lunch and judging from the way David shops, tastes food and talks about it, I'm certain the food and wine there must be really delicious. I learned more about New World wines in 5 minutes with David than I could have ever hoped from browsing books and going to tastings, etc. Thanks, David!

The only sad thing was that the Burchfield exhibition and the New Topographics show were over by the time Pablo, David and Stuart were in town. Los Angeles, it would have been smart to prolong these for our London visitors.


* FBC! has renounced to find great espresso in LA and usually makes her own stovetop coffee at home. But if I have to get coffee somewhere, it is usually very good at Bottega Marino on Larchmont, a distant second would be Intelligentsia, and the 3rd is the espresso at Surfas.

Went to Church & State last night with my daughter. She said she felt like we were on the set of Entourage. The food was and is great. We've been to Mo-ChiCA twice. Can't wait for this place to get a full-sized restaurant space, hopefully downtown. Love Bottega Louis. It's nice to be able to have a place that comes through with quality as a standard. If only there were a magic wand that could transform all of LA in the same way.

Hope the Deitch rumor holds up. The NY art press will be covering MOCA's every move if this happens!

church and state meh, and musso and frank's good?

wow... totally feel the opposite.

but i guess from a tourist's point of view.....

walter manzke at church and state is serving up some delicous seasonal food.