The Delicate Art Handlers At Work At Homeland Security 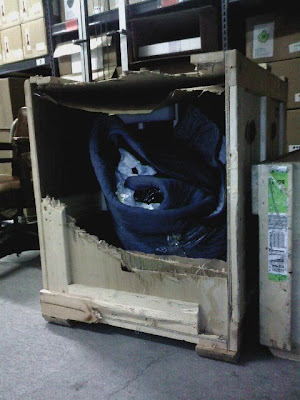 Below, I'm re-posting verbatim from Allan McCollum's website. He kindly gave me the authorization to re-post. What is really scary about the people who "opened" the crate that way is that it's clearly much more time-consuming, energy-wasting, and plain dumb to destroy the crate like this than use simple power tools to remove the screw on the lid and the lid itself.
You would think whoever did such a horrid job has anger management issues that need to be addressed, and that his/her job shouldn't be handling security concerns for the country.
And, in case they worried the crate might have contain explosives, isn't it more dangerous to attack it like that than open it carefully?

Aside from the personal problem of Allan McCollum, if this type of damages keeps on happening, you can imagine how restrictive it will be for free trade, and how destructive it is for the image of the United States abroad. I can understand that it isn't the job of Homeland Security to train its personnel to be art handlers, but surely they are intelligent enough to learn how to unscrew the side or the top of a crate to check what's inside, no?


"This is how homeland security opened a crate that was shipped to me from a gallery in Berlin, last week (March 2010). Not even bothering to unscrew the lid. It contained a sculpture of mine, from my series, "Natural Copies from the Coal Mines of Central Utah." The shippers told me that insurance won't cover any damages to artworks done by "homeland security.""