LACMA Scores A Major Collection And A Masterpiece 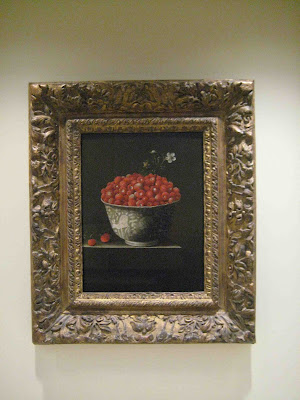 What makes the greatness of a museum isn't its dynamic exhibition policy, nor its forward education practices, or its leading public programs.
All of these are fantastic contributions, certainly, but first and foremost it's the collection that is here for years, decades, and even centuries to come, as a testimony to the culture that mattered and shaped an era. A great exhibition policy generally doesn't outlast the curators behind it, whereas a great collection outlives museum-hopping, career-oriented curators forever.
People don't really go to the Met, to MoMA or the Smithsonian for their exhibitions, but "to visit the museum" and see its collection. Because, beloved readers, my friends, most foot traffic in a museum isn't constituted from the savvy art crowd only, but from a general audience, the bulk of them being tourists and/or school children.

Museums in Los Angeles have rich collections, but generally speaking do a poor job of marketing them. Some museums worldwide attract a large audience that comes mainly to see their masterpieces (think the Louvre and Mona Lisa), and it is sad that museums here in Los Angeles fail to really reach out and publicize their holdings. Take the Getty, for example. Many people (actually, far many less than you would think) know the Getty has Van Gogh's Irises, but very few realize that James Ensor's L'Entrée du Christ à Bruxelles is there as well.

Since we are talking about Belgians, how many of you remember that LACMA owns Magritte's The Treachery of Images ("ceci n'est pas une pipe")? The "Magritte & Contemporary Art" exhibition originated at LACMA for a reason, and I think the museum should really try to make it better known to the public that it holds a XXth Century masterpiece, and that because of this reason alone tourists should flock en masse to visit the museum.
They'd get to also see a nice Marcel Duchamp readymade nearby (A Bruit Secret) and one of Frank Stella's Black Paintings (Getty Tomb). Plus a few great Kandinsky, not talking about Giacometti and Brancusi. Not bad, eh?

Let's stay in Northern Countries and highlight one of LACMA's relatively recent acquisition. It's currently up in the European Art Galleries*, and I stumbled upon it recently while visiting the collection with noted Los Angeles painter Mark Dutcher. One of my all-time favorite XVI Century Dutch Painter, Adriaen Coorte, who specialized in still-life, left about 60 paintings, and whose works are not something you stumble upon everyday, to say the least.
There was an exhibition in 2003 at the National Gallery in Washington in 2003 (alas, no catalog, but you can download the brochure) and the one at the Mauristhuis in 2008 (there is a catalog, if someone wants to send me a preemptive birthday present, I would be most grateful).

The Coorte in question comes from the remarkable Carter collection, along with a few Rembrandt, a Saenredam, at least one Frans Hals (maybe more but I only remember seeing one last week), one beautiful still-life by Clara Peeters (a female painter, a rarity for the time), and one Frans Post. Post went on an expedition to Brazil and came back with a magnificent set of paintings, the majority of which were later offered to the King of France and are now in the Louvre collections.

All of this to say that LACMA was the recipient of a major gift through the Carter collection (the gift happened sometimes between 2003 and 2009), and that FBC!'s favorite masterpiece of the lot is Coorte's delicate painting of a bowl of strawberries.
Note that it is a Chinese bowl the strawberries are in, and that this style of still-life, obviously, shares similarities with Spanish bodegones but also with, say, the paintings of France's Lubin Baugin.
With just one little painting, you now realize that global trade and exchanges were already important in the 17th Century, and that through it a sort of international style of painting was already permeating what was then the contemporary art scene. And I'm not even speaking about the reciprocal influences between the Delft and the Chinese ceramics.
Food for thoughts? I certainly hope so. Visual delectation? You bet.


* The European Art Department at LACMA is currently undergoing some renovations and re-installation. Some rooms can be closed when you come to visit. To avoid disappointment, you can become a member and then come back as many times as you want. More surprises! The Islamic art department is swell, did you know it?

In other related news, I got confirmation that there was going to be an exhibition with Dorothea Tanning in it at LACMA in 2012, In Wonderland: The Surrealist Adventures of Women Artists in Mexico and the United States, April 1-June 24, 2012

I have been scanning LACMA related news/blogs for the past few weeks and within 24 hours on your blog (and on another) I found out about two wonderful LACMA acquisitions.. I know I’m a little late on each – you posted this in March and the other blogger in ’09 – however, in my humble opinion, with a scarcity of museum related news on acquisitions, developments, gifts etc. it is always nice to happen upon blogs that are reporting this info. This is definitely a painting I will seek out and I hope to find out more information about such a wonderful gift!
Furthermore, I totally agree with you about your stance on museums and what makes them great. It is true that great curators, leadership and programs enhance their value, however, encyclopedic museums are judged based on their collections.
In my opinion LACMA has a great collection, however, it is publicized very poorly – in other words, they don’t do a great job at showing off what they have.
This is unfortunate, because it takes a true art-lover to first enter a museum without knowing its contents well and then to search through it for hidden gems.
But thanks for helping to publicize this kind of news - keep up the good work!