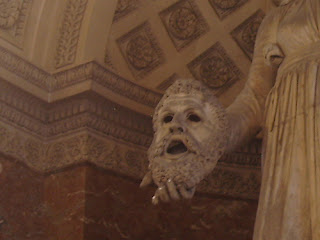 Owing to the painful side effects of whiplash, most of my posting in the next few weeks should be of a very light nature.
So instead of developing topics as deeply as I would want to, I'm just going to announce what I'm interested in. Hopefully I will be able to expand more later after all my medical troubles are over.

Many issues that periodically rock the art world have already happened and somewhat been dealt with in the past. So rather than speak about contemporary art I'm taking a Summer break. I'd rather lazily remind you that things such as:

- Is the market a good Oracle of what constitute quality? You bet. Rubens and Van Dijck were very hot in the 17th century. Vermeer was rather unknown. Now guess who [most] everyone prefers?

- Discussion as to whether museum collections should be open for free to the public? Hot topic at the end of the 18th century

- Should art be left in situ (yes folks, there is a Latin expression equivalent to "site specific")? Cicero addressed the matter in his correspondence.

- Are posthumous editions and artworks, copies and multiples legit expressions of the artist "vision"? Well the Roman seemed to think oversized/undersized/slightly modified copies of art stars were OK. Check the Praxiteles show and exhibition catalogue at the Louvre.


And so forth. Rien de nouveau sous le soleil!
Posted by Frenchy but Chic! at 1:31 PM