Pompeii And The Roman Villa At LACMA

Yesterday I had the pleasure of meeting a former colleague for lunch, and one thing leading to another I ended up visiting my first exhibitions since that last car accident. I had overestimated my energy level by a too wide margin, so today I'm paying it with extreme tiredness and increased pain. In passing, I apologize to the friends I didn't say hi to yesterday or didn't spend that much time with, but my body sorry state got the better of me and I had to get back home. Also, for any of my friends and social acquaintances, a word of warning: while I totally appreciate the sentiment behind your desire to hug me when we meet, please absolutely refrain from touching my right shoulder. The left one is fine, but the right side of me is a major block of pain. I know it's not obvious because I'm not in a cast or wear bandages, but believe me, it hurts. 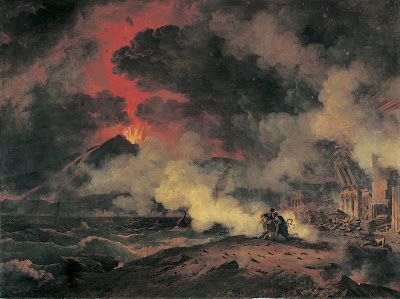 Anyway, it was pretty good to look at art again, especially since I got to see the really excellent Pompeii And The Roman Villa exhibition. You all know the story, 79 AD, Mount Vesuvius erupts, and buries an entire region under an inferno of ashes and lava. Fast-forward to the 18th century, the site is accidentally re-discovered, excavated, and a very-well preserved series of buildings and artifacts is unearthed, helping generations to re-discover Roman art in particular and Roman civilization in general, fueling the Neo-Classical movement in art, and a couple of centuries later the Roman-inspired Hollywood tradition of macho men fighting in togas and crimson capes.
This show was excellent for all the good reasons that make an exhibition memorable. First of all the material exhibited was first-rate. When almost all the pieces in an exhibition are good, you know you're in for a good ride. No little fragment of a copy of a copy here, but carefully selected outstanding pieces.
Then the curators did a great job of explaining the influence of Greek art on Roman art, but also separating the genuinely native Roman art from the Greek-inspired one. I loved the few pieces where they presented archaic-style (in French we say "archaïsant") Roman pieces made to look like antique Greek art, but with variations that clearly showed they were much later works, made to look like Greek originals. The labels were good at telling the audience these were either a case of local Roman artists trying to make fake works to sell to collectors, or on the contrary the result of commissions by the patrons wanting to have work "in the style of".
Generally speaking the educational part was really excellent, never lacking in explanations, clearly written without taking the public for a bunch of illiterate retards who don't know any better than look up words they don't understand.
It's good to see labels and didactics aimed at a higher level than 6th grade. With one glaring exception, a label placed right next to a beautiful bronze depiction of Epicure that managed to totally distort the philosopher's theories, succumbing to the Wikipedia-culture of our age, alas. Speaking about the subtext of many of the labels, it seems directed at taking stabs at "rich patrons", "wealthy Romans", etc. Now I understand curators in this country are generally frustrated at having to deal with our modern equivalent, the generous-but-not-so-knowledgeable-trustee-cum-philanthropist-patron-of-the-arts, but the way this was approached wasn't very subtle. I thought. 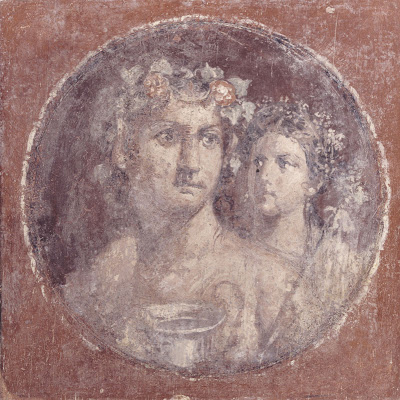 The other great thing about the show was the abundant examples of works made in various mediums, including lots of bronze sculptures (usually we see more marble than bronze), and some fresco fragments which emphasize the germane, original Roman painting styles. The Romans were also masters of glassworks, and if the examples chosen for the exhibition were few they were all absolutely exquisite. And there was one mind-blowing object, a cup made of obsidian with inlays (I think they were gold filigree and enamel, but I didn't write down notes, so I may be totally wrong here) depicting Egyptian-style scenes. Now this is a type of object you rarely see when going into a Roman art show or permanent collection, so busy are the curators usually perpetuating the mantra of "the Greek massive influence on the Romans". Aside from this there were few mosaic pieces, sadly, as the Romans were really masters of that art, but you could see some gold jewelry and a few examples of banquet dinnerware. 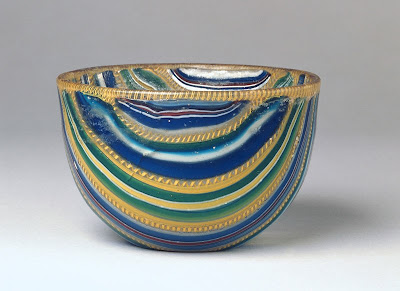 Apart from the class subtext I was mentioning earlier, the other underlying message about this exhibition is the obvious importance of "appropriation" (to borrow a contemporary term) for Roman artists and art audiences alike, whether they were appropriating/being influenced by Greek or Egyptian artists (and earlier, Etruscans ones through whom the Greek influence was initially channeled). This message is repeated in the last room of the exhibition, which contrarily to Christopher Knight I thought was absolutely appropriate, in the sense that following the message of the rest of the exhibition (the Romans being influenced by the Greek, OK?Shall I repeat it again?) we understand how this same mechanism repeated itself when Pompeii was unearthed in the 18th century and European artists started to be massively influenced themselves by what they saw.
It doesn't matter that most of the neo-classical art looks dreadful to contemporary audiences, if only because to many modern audiences the Greek-derived Roman art also appeared dreadful once the distinction was made (following Winckelmann), for a long, long Purgatory period that only now is starting to be lifted. I was also happy that in addition to the mandatory Christopher Wright of Derby (an 18th century painter specialized in volcanoes) whose work you see each time an exhibition calls for the representation of some eruption or other, the curators added a painting by Valencienne*, a French painter established in Italy who made exquisite plein-air landscape paintings on paper a long time before the Impressionists decided to follow in his steps. 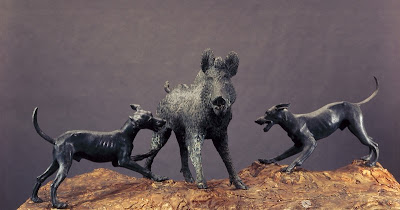 As far as I was concerned the only faux-pas in this exhibition was the inclusion of a piece by Eleanor Antin that looked so contrived and out of place in the show it managed to make that LACMA mantra of using contemporary artist to "update" historical art totally gimmicky. No, it is not because an artist makes a work that refers to the popular culture view of Roman art that the works is necessary relevant to the exhibition, no matter how it tries. Unlike the neo-classical works exhibited in the same room (as well as some Roman bronze originals), the Antin piece was trying too hard to be ironic, like twenty-something hipsters priding themselves on their ability to be sarcastic to mask their lack of intelligence and emotional empathy. When the entire exhibition was striving to underscore the path genuine cultural foreign influences can take to organically contaminate and then fertilize an entire civilization, centuries apart, the post-modern abstract take used by Antin in her piece lacked depth and breadth to make a useful connection. It's a curatorial mistake I feel LACMA should be weary of making, as not all exhibitions necessarily benefit from juxtaposing oranges and apples, nor does it behooves contemporary artists to see their weakest work selected out of context to "actualize" ancient art. But it certainly would benefit living artists in Los Angeles to go see this exhibition, if only to ponder the powers of appropriation, influence and other themes that were at play in the long history of art a long, long time before Jeff Koons & consorts.

[Aside from this, the exhibition runs through October 8th, and I advise all my beloved FBC! readership to go see it, high price notwithstanding, as it is one of the most beautiful and well-thought exhibition to see around.]

* The Louvre has an outstanding collection of Valencienne works on paper.

All photo credits can be found here. I wasn't able to copy and paste them on FBC! so I'm resorting to linking to the page.