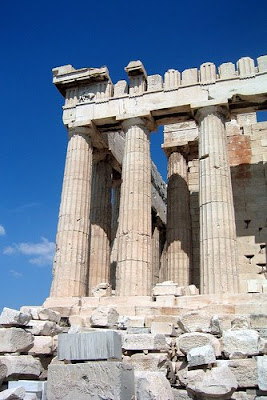 FBC! had a Labor Day battling migraine and is off to an early bedtime, but I had a quick look at the CNN website (wanted to check on hurricane Gustav) and saw this. I'm sure only a nerdy art historian would notice it while in the midst of a triptan-induced high, with a stiff neck to boot, but hey, you ignorant CNN reporter going by the byline Anthee Carassava: the Parthenon columns are not "Corinthians", no. The Parthenon is a DORIC temple, hence the columns are topped with Doric capitals. The Parthenon was built during the Archaic era, hence its Doric-ness, it's a couple of century too early to have any Corinthian stuff in it.
If you have to put details in about the columns, check your art historical stuff. Though Ms. Carassava writes for the NYT where they used to get people to fabricate stuff altogether, so I guess one Corinthian column here and there on CNN doesn't resonate as an egregious mistake. Cool, then maybe the Elgin Marbles are just kiddie toys the British Museum can keep, as tourists could trip on them while looking up the Parthenon's Corinthian capitals.

Images courtesy of this flickr user.
Posted by Frenchy but Chic! at 9:23 PM