Your Social Life In Kippyland 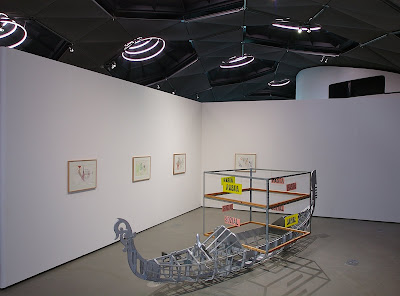 This installment of YSL (not to be confused with the logo of a late famous French fashion designer) is a bit late, as FBC! has been away from her laptop all day long. I'm so unused to be outside I almost got pulverized into dust by the sunlight.
The reason I got out this week is we're deep into the wonderland of Kippenberger, as the opening of his retrospective at MoCA is going to occupy both the Grand Avenue location AND the Geffen, which along with the California Conceptualists show (drawn from the permanent collection) will house the mega-installation "The Happy End Of Franz Kafka's Amerika".
FBC! has been awaiting this show for a long, long time, and is delighted it will eventually go to MoMA to show those retarded NYers how Los Angeles curators can originate shows before them.
Oh, oopsie, there already was a Kippenberger retrospective in Europe a couple of years ago, co-curated by Jessica Morgan for the Tate and Doris Krystof for the K21. What can I say? They're always late to catch up in America. And I'm not speaking (only) about the stock market.
Along with Doris a bunch of people are in town, a bunch of German-speaking ones at that. It's a great reminder of how most of the great Los Angeles artists have found a welcoming reception to their works in Europe through the German and Austrian gateways: galleries, kunsthallen, museums, collectors, journals and critics. Speaking of which, Diederich Diederichsen is giving a talk at MoCA on Sunday.

So you've guessed, if you have managed to wrestle an invitation or are simply on the mailing list, the Kippenberger Saturday opening is the one to be.
Now, if for some reason you haven't gotten one, fear not! You can always go to the Andrew Berardini-curated Dave Muller Musical Library at the Armory in Pasadena (and also see the Craig Kauffman drawing show, while you're at it).
There's also an opening at LAXart that promises to be extraordinary boring, and extraordinary also in the sense that I think it's the first time EVER there's a show there I truly, truly have no desire to see. I'm very surprised they are getting Silvia Kolbowski, I mean, it's the type of stuff only Grad students being force-fed the stiff, dogmatic theoricritical™ magma oozing out of the pages of October would maybe dream of organizing. Me, it gives me nightmares. I'd rather go see Resnais's original movie again (and even re-read the Duras book) than sit through an after Alain Resnais "post-structuralist deconstructed take" or whatever they call it. Oh well, only one boring show over more than 2 years of existence, it's not bad, everyone is entitled to a mistake.

And speaking of October, I see Thierry de Duve has an essay in the last one (you can download the pdf for free), and is also one of the scholars in residence at the GRI. Hopefully we'll see him sauntering around town at various openings. As far as theorists go, he's a cool one, and he's also Belgian (you know how much I like Belgium). Welcome Thierry de Duve! Have fun in LA!
De Duve has written about some of FBC!'s private Gods, such as Jeff Wall and Dan Graham, and you see that fabulous transition I'm using just to announce you that finally, finally the Dan Graham retrospective will come to MoCA in February 2009! Save the date!!!!!

Picture from the Kunsthaus Graz website (hi Adam Budak!)
Posted by Frenchy but Chic! at 8:31 PM