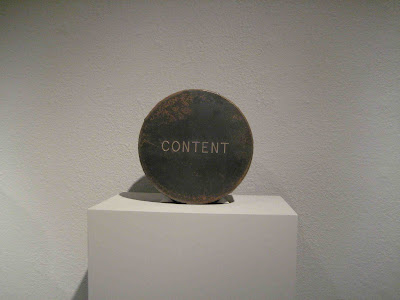 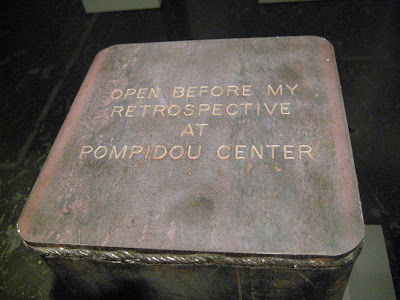 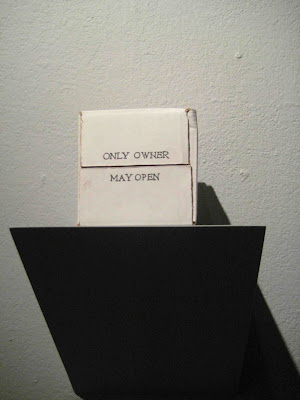 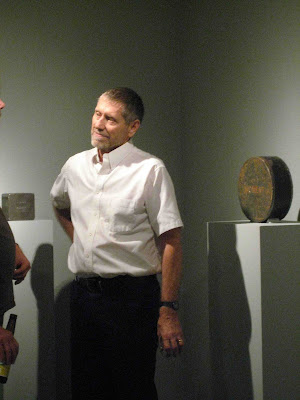 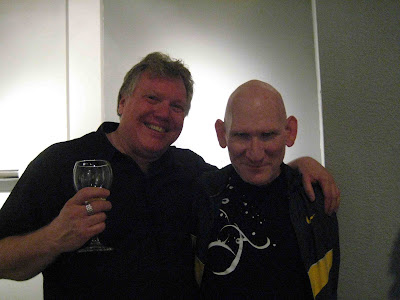 Stephen Kaltenbach was the other artist whose opening I went to on Saturday. Kaltenbach is a conceptual artist with a deep sense of humor, and FBC! has been a fan of his work since relatively late, actually, thanks to my former boss Lynn Zelevansky. Without her I wouldn't have discovered anotheryearinla and Kaltenbach's work. If by happenstance one of my reader was moneyed, I suggest you buy a nice time-capsule (absolutely randomly: "Content", OK?) and donate it to LACMA.
Kaltenbach is better-known for a series of ads in Artforum in the late 1960s, which I'd love to give you more info about but everything I have here is in hard copy, somewhere in my archives. My archives are a pile of folders, papers and books that currently look like the tower of Pisa, as I need bookshelves. It won't kill you to do a bit of research yourself anyway, so have fun doing it, it's a great artwork. Also should be a pre-requisite for all grad students entering art schools (along with Paul McCarthy's video "Painter").
For his last show he mounted a mini-retrospective of his Time Capsules that looked awesome, and witty, and if you really, really, like me you can donate that "Content" one to me and give another artwork to LACMA. I won't tell.

It was a fun opening as usual at David and Cathy Stone, and FBC! was delighted to meet artists Mark A. Rodriguez and Nadege Monchera there, as well as new art dealer Charlie James (he's opening where Telic used to be in Chinatown), Stephen Kaltenbach himself and the always delightful Peter Frank! Peter is the associate editor for new art magazine 'The" where yours truly may write in the future (NB: no website is listed on the masthead, so I'll let you Google "the", OK?). Both Peter and Stephen gave me tips for my novel, seeing they were in NYC at the right period, and following our fruitful conversation Kaltenbach himself agreed to a cameo appearance in the story. Needless to say, I'm thrilled.
Have fun going to see his show, and don't neglect to ask and see the "canceled" copy of the misprinted catalog (and buy yourself the right one when it's out, Lucy Lippard among others had written an essay). It's like those unique stamps worth tons of money by virtue of never having been put in circulation. Maybe it will end up inside a future time capsule...

Pictures: "Content", "open before my retrospective at Pompidou Center", "Only owner may open", Stephen Kaltenbach in front of "Moment", David Stone and Peter Frank. Artworks titles are approximative, I don't have the checklist with me.
Posted by Frenchy but Chic! at 5:17 PM