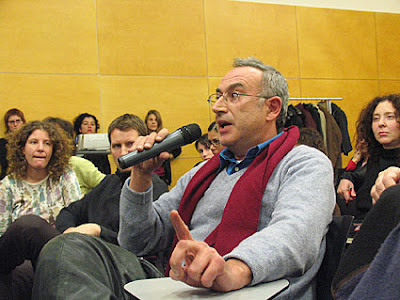 I've learned today the passing of Olivier Debroise, a curator, critic, writer and scholar of French origin who lived in Mexico. Because we were both French many people assumed we knew each other, but Olivier was 20 years my senior and moved to Mexico before I even knew what art was. We met only once about 2 years ago, but I can only say I knew of him rather than really knew him. I keep the impression of a very nice, warm and friendly person. He was very involved in making contemporary Mexican art well-known outside of its border, and also contributed learned research on historical Mexican photography. And much, much more.
I always heard great things about him from everyone involved with arts in Mexico, and I'm deeply saddened he passed away prematurely. As we say in French, ce sont toujours les meilleurs qui s'en vont les premiers (the best ones are always the first to go).

As usual the NYC-centric art informants prefer to concentrate on the comings and goings of the powerful and famous, rather than chronicle the life of someone who really worked to make a difference. Feel free to write testimonies about Olivier in the comments section, and visit Blow de La Barra's to contribute as well. My very best wishes to everyone who knew and cared for Olivier.

Olivier Debroise's picture courtesy of this site.
There's an article here, if you speak Spanish and suscribe to La Reforma (in the "Noticias por seccion" under "Cultura" click on "Fallece Olivier Debroise").

(thanks to Pablo de la Barra and Rita Gonzalez)
Posted by Frenchy but Chic! at 4:41 PM

In addition to being talented and intellectual, Olivier was warm and kind and fun. I am heart-sick about his passing. I had the pleasure of working with him at inSite97. Barbara Metz