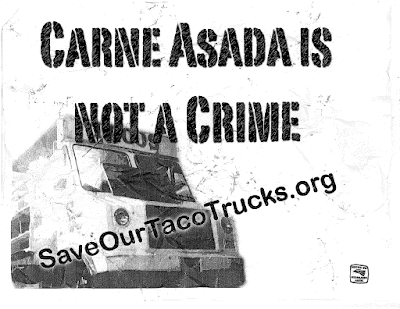 This is LA-oriented, but if you've visited from abroad, you may have noticed our beloved tacos trucks. It's the Los Angeles equivalent to le camion-pizza. Without them, we couldn't survive: most kitchens in LA restaurants close at 10 PM, so the local truck is often the only late-night dining option. In addition, if you're stuck working in some culinary wasteland, more often than not the taco truck will be the only edible option within several miles.
For example, where I live in a very residential mid-city neighborhood, there simply isn't anything to eat at all after 8 PM but the taco truck at Olympic and La Brea (I recommend the Al Pastor).
They are so beloved that there's even one blog devoted to them, by one literary guy who calls himself Bandini!*
But some evil local politician recently decided to try pass an ordinance that would all but ban our beloved trucks from freely roaming and feeding our neighborhood. Supposedly because they are some competition to "established restaurants". Which is stupid as taco trucks provide services that restaurants don't offer (see above). Plus they are cheap, and with all the talk about soaring food costs they offer a low-budget option to all recently laid off or impoverished LA denizens.
I sure hope it will cost that guy's next re-election, but meanwhile please help Los Angeles keep its culinary vernacular tradition alive by signing the petition here.
Thanks!

* we also have one blog devoted to ramen by the aptly-named rameniac.
Posted by Frenchy but Chic! at 12:03 PM

Email ThisBlogThis!Share to TwitterShare to FacebookShare to Pinterest
Labels: carne asada is not a crime, rameniac, Save our taco trucks, the great tacos hunt