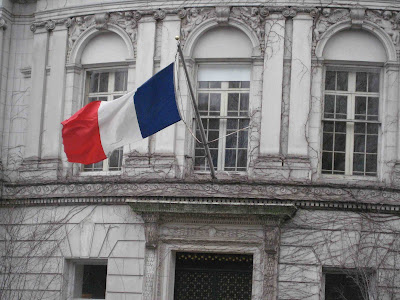 Today it's Bastille Day, and I realize some of my faithful readers may have expected a special post. I apologize for not having done so really but
a) I had to go pick up my car from my mechanic, and it's far away and involves 3 bus rides. In short, it takes time away from the computer,
b) I'm trying to write lots of non-blog related things at the moment, plus preparing an interview with one of the greatest artists coming out of LA in the last decades (hi Edgar!) and I don't want to screw it up
and
c) unfortunately Bastille Day is also the anniversary of a very close relative death 3 years ago, and I don't feel like celebrating very much. Its getting easier with the passing of time, but I'm usually not very joyful around that time of the year (Thanksgiving being another one).

So I didn't compile any list of French stuff to do in LA, but I did swing by La Maison du Pain to get my lunch, and today they offer you a very cool thing: a blue, white and red ice cream sandwich made with macarons! I totally loved it, its quirky and fun, very sweet (sentimentally speaking) and refreshing with the weather we have. It's not very big so it's a perfect (I don't like food that's too big-portioned).

Also I see the poll is exciting your interest, though the count is a bit off (there's a discrepancy between the actual number of respondents, which is higher, and what is posted under the poll.) It has given me an idea for the next poll, so expect to see one in 3 or 4 days.
In the next few weeks there will be very light posting on the blog as I try to advance my novel. And look for jobs because, you know, my savings are not eternal, unlike hope and audacity, so I have to think about my not too far future. Blogging is fun, but takes a bit of time especially for a non-native English speaker. But there will be an anniversary poll at the end of the month, as FBC! is almost 1!

Meanwhile, happy Bastille Day for you, please indulge your inner French, listen to Serge Gainsbourg, Jane Birkin (she's an honorary French), Charles de Goal, Alain Bashung, Francoise Hardy, Jacques Dutronc, you can even read Houellebecq (I find him boring personally) or Regis Jauffret, look at Alain Sechas or Matthieu Laurette's work (hi! I love you guys!) and go get yourself some pastries at la Maison du Pain.
Posted by Frenchy but Chic! at 4:01 PM