Frenchy Goes To A French Restaurant! 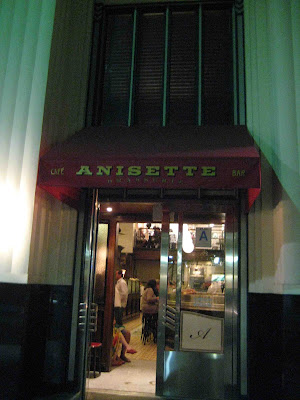 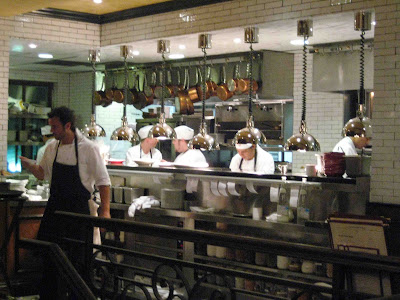 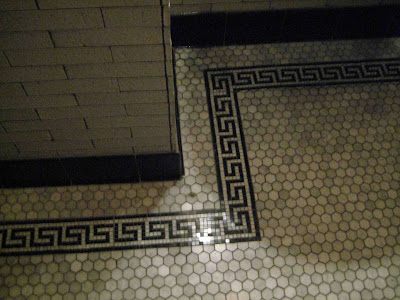 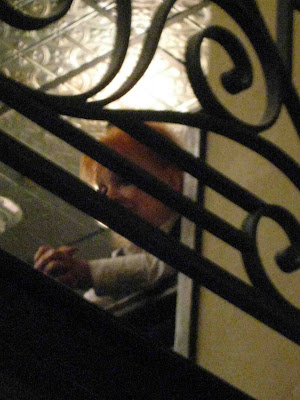 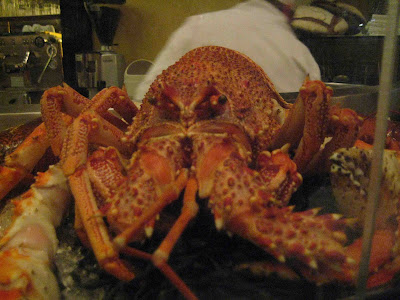 I always felt there were very few real French restaurants in LA, as they're usually too Californified. Each time I see a French restaurant that offers crabcakes or seared mahi-mahi I know right away it's been Californifusionified and I don't need to go to French restaurant for this, merci bien. Some of them are OK, like Little Next Door or Monsieur Marcel, but nothing to write home about ("Dear Mom, I've been to a French restaurant, they do steak frites for $44! plus tax and tip, they don't know what service compris means!").
But for the past few months there has been growing anticipation about the opening of Anisette, the new venture of Alain Giraud from Bastide fame. Where I've never eaten, but like everyone else I've been waiting for Anisette to open. Mostly because Alain Giraud, being a neighbor, also frequents my beloved Maison du Pain which I see as a sure indication of good taste (see how humble I am?).

Anyway, Sunday last week my houseguest took me there for dinner to my greatest delight. The decor is very Disneyfied, an LA interior decorator version of what a French brasserie looks like (the wallpaper is very un-French for example, but 19th century US, the drawer handles behind the bar are typically American, etc), but it's nevertheless beautiful and also feels comfy despite the very high ceilings. Nice tiled floor, dark wood everywhere, mirrors and balloon-globed chandeliers, dark red booths. The place was packed to the rafters ( at 7.30 PM on a Sunday evening of the 4th of July weekend, during recession times) so we ate at the bar. We had no difficulty finding 2 stools at the end, not too far from the waiters/busboys station.
I sat right in front of the beer tap so I could see they misspelled "Hoegaarden" but I'm probably the only person who notices that type of detail.
Unlike in restaurants back home, you can have the full menu while dining at the bar, and they give you your own fabric (not paper) tablecloth. Classy!

Our waitress/bartender was adorably sweet and trying very hard to recommend her favorite dishes. Also, my favorite LA waiter, Karl, was on hand. Karl is my favorite LA waiter because 1) he's from my hometown, and never in 20 years have I ever met another escapee from there and 2) He left Fraiche to come and work for Alain Giraud "as soon as I knew he was hiring", which shows how well-liked Giraud is among the LA French restaurant and bakery workers.
There were some other French waiters around, and Alain Giraud himself was buzzing around. He's easily recognizable if you are wondering, he's the most French-looking middle-aged gentleman ever, and he wears civvies (hell, he's the boss, he can!) not a chef outfit.

We shared a sweetbreads appetizer that was to die for. They come with a fabulous sauce (I'd surmise butter and veal stock), very tender sliced carrots and extremely fresh petite peas. The sweetbreads themselves were soft but slightly crunchy, very delicate and flavorful all at once. Clearly the best sweetbreads I had in a long, long time, breathtakingly well-prepared and satisfying. The portion is rather small, French-style, as an appetizer should be, but fear not! Gargantuan-stomached reader! The entrees are American -sized, so you won't starve.
The bread was good, though it wasn't a baguette but a combination of pain de campagne and olive bread.

The only deception of the evening came when our lovely waitress came desolately to tell me the Homard Thermidor had run out. Not surprising, since at $28 it's more than reasonably priced for a grilled Maine lobster. She tried very hard to win me over to the cod, but my heart was set on the moules frites, same as my dinner companion.
They came in a huge Staub cast-iron pot designed like a giant mussel, and a nice cornet of very good fries. Those are very good garlicky moules frites, but honestly it's hard to screw up such a simple dish.
Nevertheless they were very tasty and we ate every single one of them, then did the unthinkable in France (bad manners! don't try this in Paris!) we dunked our cornet of French fries in the broth and ate them drenched in an onion, wine, mussel broth, cream and garlic sauce that makes life worth living.

For dessert I got the Foret Noire, not to be confused with what passes for Black Forest Cake in the US. The chocolate cake was light and airy, as was the whipped cream and the chocolate mousse, (it's not supposed to be ganache or buttercream) and the cherries (griottes) were macerated in kirsch, which was also used to moist the cake. Such a perfect execution at Anisette, it made me feel like I was in Alsace.
My friend had the vacherin, which is the Anisette rendition, a Derrida-inspired, deconstructed idea of a vacherin (normally vacherin is made of ice cream encased in a meringue box-like crust with fresh fruit and whipped cream). The ice cream was lavender, very subtle yet intensely flavored, topped with whipped cream, tiny slivers of teardrop-shaped meringue, and strawberries.

For drinks I had a glass of a 2005 Graves (a white Bordeaux) and my friend a Hoegaarden on tap. I finished with an excellent decaf espresso that was neither watery nor tasted like burnt rubber. Excellent, really.
The service was very sweet and attentive, they paid attention to the pace of our eating to replenish our glasses, including the water, to take away the mussel shells, etc. I did have to ask again our waitress for the espresso to come at the same time as my dessert, so she flagged the busboy, but given how packed the place was it's really not a big deal. We never had to wait for long for anything. And as much as I said how adorable our waitress was, and that I was happy to see Karl who recognized me and came by to say hi, the service wasn't the in-your-face type of hovering clueless friendly actor you find so often in LA. Waiters at Anisette are clearly professionals, not people hating their day job, so that was nice.
Another great thing is despite the high ceilings and how very large the restaurant is, it wasn't noisy even though it was totally crowded. It's so rare to find a restaurant in LA (well, Santa Monica) where you can have a decent conversation without having to scream at the top of your lungs.
The one and only thing that was a bit off for me was that I found the food rather salty, but I almost never put any salt when I cook at home (to the point I'm starting to be turned off cheese as it's usually very salty).

No restaurant experience is complete without a visit to the Ladies Room, and the experience at Anisette is cinematic. Not that you feel like you're in an Almodovar movie (the only ones where characters use bathrooms ever) but because upstairs there was a "dame-pipi" (a bathroom attendant) to show you the door. She looked beautifully decayed, with flaming dyed red hair, in tired makeup, out of a 1970s movie, silently gesturing with an ample arm movement toward the stall that was available. It felt...beautiful. This woman could be in a Fassbinder movie, if Fassbinder was still alive.

So all in all, a great experience. Anisette is a brasserie, so the food is solid, extremely good and features very-well executed French classic.s It's not adventurous nor imaginative but plainly excellent. The place to celebrate a Bastille Day breakfast, and if I get my car back from the shop on Monday this is where you'll find me for a morning coffee next week.

Pix: Anisette's doorway, the kitchens, the bathroom floor, the dame-pipi, and a humongous lobster from the raw bar.
Posted by Frenchy but Chic! at 4:25 PM