Summer in LA and Elsewhere! 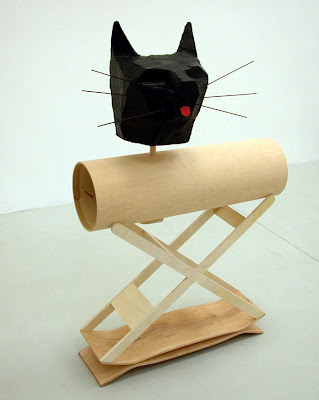 I hope you had a great 4th of July weekend, dear faithful readers, and that unlike mine it was filled with art.
FBC! got an unexpected out-of-town guest and was therefore away from the computer, so no opportunities for me to write anything and let you know what was going on.

There's a slew of FBC! pals having shows up currently, or upcoming group shows going on. First of all, Roger Dickes who's also the curator of the Glendale College Gallery had a show opening 10 days ago in Eagle Rock. It's called Firmament Avenue and you can find all the details here. He's also in a group show but I don't have the info immediately handy.
Another old FBC! pal, Donald Morgan (see pix) had a sculpture show opening in Portland (Oregon), Hunters and Collectors (remember that band?) at Rocks Box last Saturday. In passing, FBC! says hello! to the vibrant Portland art community and its flagship blog, Portland Art.
Closer to us here in LA Nancy Popp and the lovely LA Art Girls are having an opening at Phantom Galleries on Thursday.

As it is the case every Summer in LA, there are way too many openings coming up during the next couple of months. You see in NYC they (galleries, collectors, curators, parasites, gawkers, Fitzgerald readers) all go up to the Hamptons (where they also open stuff up and have funny art fairs, but let's forget the Hamptons microcosmos one minute, OK?), in London they go abroad, in Paris they go to the country and the galleries in all those places just have some guest-curated Summer group shows, usually kinda mediocre as they are a slapdash juxtaposition of the gallery inventory and the curators' best friends.
So it doesn't feel like work and you don't feel obligated to go to every single bloody opening there is.

In LA, not such chance, so every weekend is spent in between the friendly stuff happening in NELA, the one-step-above shows in Chinatown, the trendy ones in Culver City, WeHo, etc and the blue chip ones on the West Side. The problem is, in LA you have to pollute the planet and drive to see all those things. Sure there are still some Summer group shows, but the practice isn't too widespread. So as an alternative, I suggest you forget going to every single one of them, but just follow FBC!'s selection of ONE to THREE shows every week AT BEST. They come in addition to the aforementioned FBC! pals shows, those one are mandatory.

So this weekend, it's super easy! There's:

1. Group show at Steve Turner curated by the gallery new director, legendary curator Carol Ann Klonarides (in passing the website still sucks). Steve Turner was my second-favorite LA gallery after Susan Vielmetter, so with Carol Ann at the helm it should be even more interesting.
2. The Architecture of John Lautner at the Hammer.
3. The LA Art Girls at Phantom Gallery! Check the website for the location.
Posted by Frenchy but Chic! at 4:28 PM

D`Morgan's show had a swell opening saturday night which must have been fun for him... there were so many fireworks on Interstate ave the night before it was like a war zone.

I'm curating a show with more of your freinds that opens August 30th. Let us know if you make the trek north?

I'd love to do the trek, but my stupid car is proving unreliable. This being said I'm planning to go visit Portland in the next 6 months or so.