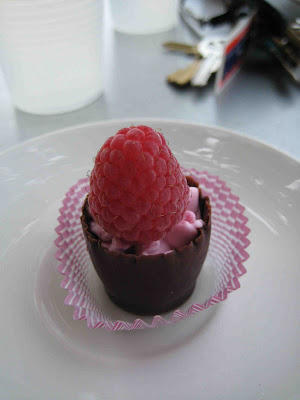 Exactly a year ago, I started FBC ! literally by accident, a double accident in fact. About two weeks before FBC!’s unplanned birth, a very distracted driver saw fit to run a stop sign and race into three lanes to hit me, so desirable was I. My car was $1,900 damaged and my body a bit more incalculably, since I spent the next three months loaded with painkillers, unable to hold my head (who would have known it could be such a feat?), stand up, sit down, or lay down without being in blasted continuous pain. Not only I couldn’t read, listen to music or even watch TV, I was that brain-damaged (only figuratively, OK? Please don’t freak out) I couldn’t even think about anything beyond “if I take that damn pill maybe my head will stop spinning and that jello inside my cranium will stop trembling and sliding painfully inside”. But I had just bought a brand new MacBook , so during one of those miraculous 20 minutes pain-free breaks that seemed to happen every 4 or 5 days or so, out of boredom I Googled “blog”, ended up on the Blogger/Blogspot website, took the tour and Oopsie, what had I done? Frenchy But Chic! was born.

I had absolutely no idea what to blog about, since a) I couldn’t think and b) to type on said laptop, I had to adopt a very improbable position, laying on my bed with my upper body totally flat, and the laptop balanced at a precarious angle on my bent knees.
It was supposed to have been the Summer of Me. I had plans. I was to resume my curatorial freelance career with no less than 3 shows (2 groups shows, one solo) in preparation, and maybe on the side start to write a novel, but mostly do my own stuff and go swim every evening just because I really love it (now you know) and I wanted to get back into shape (ha! fat chance!). That bloody accident of course stopped all my best-laid plans dead in their tracks. It was a very boring Summer, as everybody was roaming the art paths of Europe to do the Documenta-Venice-Muenster trifecta, so I had no friends around*. And in case people had dropped by to keep me company I was too fucked up and too high on painkillers to be able to hold a decent conversation. So, life sucked, and my only distraction was blogging and that was it.

I really thought I was going to kill the blog once I was recovered and then go back to curating, thank you very much. Now, 246 posts later, I have to reconsider. It never occurred to my mind some people (save for a few close friends) would read it, being so used to nobody having a look at my catalogue essays or other art stuff. But you, my faithful, beloved readership, kept sending me kind emails and messages, to my absolute surprise. Who would have known so many people would be fascinated by what I was having for lunch? Or what I would say about, I don’t know, the economy, fashion icons, the WGA strike, conservation issues, Joseph Beuys. I was stunned to see some people were leaving comments. Incidentally it reinforced my intimate conviction that some people have absolutely no sense of humor whatsoever, or maybe the literacy rates are a bit lower than statistics show. But those don't constitute the bulk of my readership, thanks God.
It was really heartwarming, and it is still, when I run into people who read the blog and kindly make comments about it. Now FBC! seems to have taken a life in its own, to the point that even my friends call me “Frenchy”. I’m very touched when someone tells me about cooking a recipe I’ve posted, and totally awed when they tell me it was really good. Goodness gracious, my recipes work!
I greatly enjoy when I receive emails about something I posted, usually about some art thing, and the person discusses some finer points with me. And I’m really moved when on one of my whiny days (you know, car stolen, whiplash pains coming back, family stuff) someone sends me a really sweet supportive email. You guys are awesome, and I want to thank you for your support, your continuous attention to my humble writings, and your patience with my vaguely-formulated rants on everything from Obama to the economy to that really bad book I’ve read. So I’m chugging along, until I’m done with my novel and then look for a job again, because my savings are still not eternal and they go diminishing faster than President Bush’s declining popularity.

The novel is taking center stage in my life right now, so I try to update the blog only once or twice a week with the regular Your Social Life post, about what to see in Los Angeles. Progressively the blog has become more and more focused on art, even though I clearly didn’t want to do that in the first place. I’m trying to balance it with food reviews, but I’ve abandoned the “Thanksgiving In [Insert Month Here]™ series. Not because I was running out of Worthies to celebrate, far from it, but because after a bad cold in January I missed the window of opportunity to write the one I’ve planned, followed by a second lost opportunity in February when my Civic, the one that sustained $1,900 in damages, was stolen. After that it looked weird to resume the series anew, but I may do some occasional posts here and there. I will post more art reviews when I’m done with the first draft of the novel, but right now I don’t go out at all, so no shows for me to review. But I’d accept reviews submitted by readers, if some of you are interested.

During FBC!’s first year you’ve learned I was an art scholar, a curator, that I loved food, I read a lot, I have adopted a moody, skittish cat called Pomme (Hi baby! Love ya!), that I had a Fellow Espresso Drinker as well as a Distinguished Literary Correspondent, that I sometimes go to openings, got a new car called Mam’zelle VaVaVoom (indeed, you named her in a poll) and that when it works I feel like a blonde with fake boobs and a spray tan, and when it doesn’t I’m pissed, and also that I have a vague crush on Daniel Craig (picture NSFW. if you missed that one, you’re blind) and that my favorite gallery in LA is, is, is? Susan V!
Quite a few readers were really interested in knowing where I got my polka-dotted tablecloth, the one you see on all my food photos: answer, the Carrefour supermarket chain in France, 9,90 Euros, alas out of stock. Some photography specialists (Hi Eve!) kindly commented on the quality of my pics, which is entirely due to my Canon Powershot SD 750, but I really don’t have any skills in that department. In fact I was so bad at taking pictures that the camera I have right now is my very first one. Now you know I’m writing a novel, and to answer a few email inquiries I’ve recently received, yes I do intend to go back to curating, sooner rather than later, possibly in LA if some generous institution offers me a job, or a decent spot with a decent fee. If the City of Portland offers the same, I may move there, do you hear me Portland? Portland, Oregon, not the one in Maine.
Failing that I’d love, love to curate a huge show at the Park Avenue Armory in NYC, if I get a decent budget. That place is magical. The kind of place where you would like Catherine Sullivan or Isaac Julien to shoot a video. For example.

Okay, enough with my life and my wish list. To go back to FBC! I’ve renounced to make it professional, because it’s a one-person blog and to try and get advertisement to support it I’d need to work with a team, including someone better than me at dealing with code, who could do a redesign, etc. In passing, I’ll get rid of the GoogleAdsense thing soonish, as it doesn’t bring in any cent (which was expected, I don’t click on those myself when I visit other sites), though I’m getting a very perverse kick of seeing what ads they match to my posts. Like each time I mention I may look for a job, I see “waitress jobs” appearing, or if I use the word “French” too many times I see ads for French manicures.
So I’ll keep FBC! amateurish, typos and all, which I blush about when I re-read my posts a few days later but I think it’s OK, it’s not as shocking as on the front page of the LA Times (RIP, LA Times, see what happens when a billionaire garden gnome shops for media). I just want to apologize to Andrew Berardini whose name I have consistently misspelled on those very pages, and he’s someone whose writings I like, so I feel like a complete dork. Sorry Mr. Berardini, may you get better readers than this clueless Frenchy, but keep on the good works nonetheless, you’re really brilliant.
I’ll try to think about more polls in the future, since you guys seem to really enjoy those, the latest one being very heated: you chose to name the entire class of curators the ArtsyFartsy Mindfucks, but 37% of you voted for that one, when the remainder was evenly divided between the ArtAdmins and The Curzillas. One lonely vote went to KissMyAssYouDramaQueenArtist, which makes me think I have a majority of artist readers and a few lone curators, you my poor battered, misunderstood brethren.
Before I finish, if you guys want to leave comments about the type of posts you’d like to see in the future (that is, after I’m finished with writing fiction), if you have suggestions about future polls, or if you would like to write something for FBC! yourself, drop me a line either at the blog address or in the comments section. And finally, my only regret with FBC! has to do with the template I chose last year: for some reasons I cannot post more than 5 photos with each post, and that’s really a hindrance when I have no time to review a show, but would love to show you pictures of it anyway.
Happy anniversary to you and me, my dear devoted, beloved readership, may you have a peaceful upcoming year!

* I would like to thank profusely my buddy Daniel C. who kindly came once a week to take me out to coffee, even though I couldn’t utter a coherent word, did my grocery shopping for me, took me to the doctor, regularly checked on me and generally speaking was the best, most reliable, understanding friend ever. Ditto Robin L. and Roger D. who came immediately to visit me after they learned of my sorry state of affairs.
Posted by Frenchy but Chic! at 5:12 PM

i'm so happy that you keep posting in spite of the occasional misadventure.
I try to read you often and really love your tone, perspective, sense of humor.... i keep learning from you ;)
thanks and keep it up!
/the faithful reader from the coffee country.

Happy birthday FBC, from the cocinera loca living in Paris!