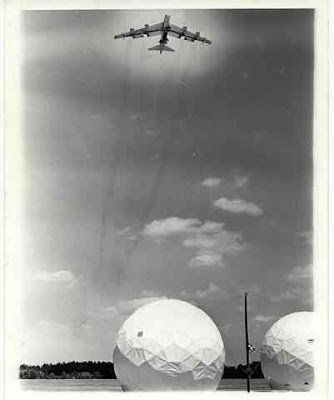 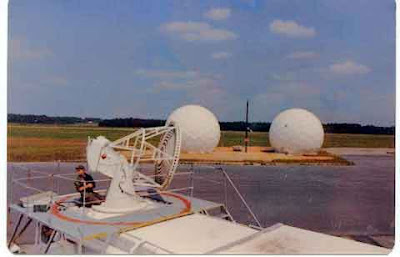 Los Angeles-based artist Vincent Johnson sent me a text about his Air Force experience in the ‘70s, an essay which was triggered by his recent visit to the Buckminster Fuller (father of the geodesic dome) show in New York. As you will see by clicking on the link this essay has a direct resonance with his past and current work. This Fall Vincent will be in a group show Atomic Afterimage at the Boston University Art Gallery. The artists in the show are Vincent Johnson, the late Bruce Conner, Richard Misrach, Robert Longo, Joy Garnett and Trevor Paglen. It opens on September 4th, and a catalog will be published (not sure how this essay relates but it's interesting to look at).

Vincent will be showing three new works, all made in 2008. They are 30x40 inch composite photographic Lightjet prints. Two of the work contains several images related to the Cold War. (ABomb), and (American Bomb Shelters). The third is of the bomb shelters and users of them, in the London Blitz.
This is the second time I have the pleasure to host Vincent here at FBC! and I'm enormously pleased he's contributing again here. How many artists do you know have been in the army doing top-secret work?

The pictures illustrating this post are courtesy of this site and that one.

"My name is Vincent Johnson. I was a member of the Detachment 3 (DET 3), First Combat Evaluation Group (1CEVG), Radar Bomb Scoring Unit, Statesboro, Georgia, from 1974-1977. Our unit was a part of Strategic Air Command. We were part of a consortium of units that included Electronic Ground Approach, Electronic Warfare, Ground Control Intercept, Ground Control Approach. Each of these military programs was overlapped by similar programs in the other American armed forces. I was eighteen when I joined the unit, by age nineteen I was a Sergeant. All of the members of my unit held a security clearance above Top Secret. I completed a six-week Basic Training, in the blazing bug-infested heat of summer of 1973, at Lackland Air Force Base, in San Antonio, Texas. I then trained for a solid year in a mobile ground radar operation and maintenance school, followed by a special Soviet-made T2A radar system program, both at Keesler Air Force Base, in Biloxi, Mississippi. Biloxi and San Antonio would be the only time I would actually live on a base. At Statesboro Bomb Plot, there was no base, only a remote facility with two huge geodesic domes and several military support trailers. We lived in apartments in town near Georgia Southern College.
When people would ask us about the work we did, or about the radomes, we would tell them that they were for collecting weather information. Our unit was responsible for training both United States Air Force and that of Canada, on how to engage the Soviet-made T2A radar system. We were "the enemy" that they had to evade to successfully pursue and engage their targets. The Soviet-made T2A system was radically different from the American radar program in which we were also trained upon. The American system employed a mono pulse "Beep - beep - beep", which tracked and locked onto an aircraft by continuously tracking it with radar pulses. The Soviet system, which was massive, and almost as tall as the six story radomes, used two separate units, one in each radome, which we called "Fox/Golf." The "Fox" was this gigantic radar unit, with a vast armature, which the airplane wing sized radar tracking bar East to West in a slow but steady sweeping motion. It provided information to computers for the Azimuth coordinates and flight information. "Golf" was similar in size, also in its own radome, but its tracking armature moved from North to South, again in a vast sweeping motion, to gather Elevation coordinates and flight information. The advantage of the Soviet system was its space window: It's "eye" could see 16 degrees of the sky, whereas the American mono pulse scan had a space window of only one degree, meaning that it could see only a small portion of what the Soviet system could see re: incoming aircraft. The Soviet T2A system also was linked to a ground-to-air rocket launching system. What would happen is the Azimuth and Elevation radar would send a tracking pulse to see if there were incoming aircrafts. It would lock onto the aircraft, and then send a second pulse, and then it would calculate the true airspeed of the craft, its altitude, etc., direction, and then its crew would launch into action, firing a rocket or more where it anticipated the aircraft would then be located. It was quite successful in what it was designed to do.

Other differences between the American and Soviet systems were the circular radarscope for the Americans, while the Soviet system used what was called a J-scope. The J-scope was rectangular, about 4 inches across and about twice as tall. It provided a greater capacity to distinguish low lying aircraft at the level of the "grass" - the noise that radars detect from there being permanent structures in its tracking eye. All of the training missions took place between 3AM and about 6AM. We would receive inbound traffic from the various Air Force bases on the East Coast. We would start work at midnight, and do maintenance runs and equipment tests, before setting up for the bombing runs. Out unit all wore sunglasses, even during crew briefings, and all of us had our caps turned backwards on our heads. One of the tests we did weekly was called an "Arc Light Jump Test." It was a three-man operation. One of our crew would take a plastic rod, which had a hook on one end, and cause a 20,000 volt of electricity to arc a short distance, by touching a metal cap on the radar's central gigantic vacuum tube. That brave soul would be standing on the corrugated metal platform, where all of our radar maintenance was performed. The second person would have what looked like a broomstick in his hand, to knock away the guy or the stick if he was suddenly electrocuted. The third guy was there for backup. Each of us would take turns doing the Arc Light Jump Test, to make it fair.

Only those of us with the appropriate security clearance and training entered the T2A system trailers. There were black leathery curtains covering the entrances to them, but not on any other part of the Bomb Plot. Our crew chief was regularly reporting to Strategic Air Command that someone on the site who was not in our unit was resetting the resistance pots on the analog computers, causing the entire system to be shut down for testing before being back in operation again. Fortunately the radomes were impervious to rain, heat, and any other natural weather occurrences, which made our jobs easier, since we could perform them during a torrential downpour in the Georgia night.

What would happen next, is the B-52 bomber we were engaging for a bombing mission would climb to its appropriate elevation, and line itself up to be able to bomb drop on its given targets. Our unit would watch the bomber's progress as it entered the bomb box. As the bomber lined up and was ready to engage its first and succeeding targets, the words "GIANT ZERO" would be spoken by the pilot, which we heard over our radio.

What the phrase meant was that everything inside the bomb box, where the target was located, was now a GIANT ZERO. Total devastation. The B-52 would be accompanied by a couple of fierce and deadly F-series fighter jets. They would make their evasive action while being fired upon from the ground, they would make their combat break to separate themselves from the combat event, and would return to base.

After the initial engagement of the night, more aircrafts came through for their training missions. I also served as a Flight Information Recorder, for each bombing mission. One of the most interesting calculations I remember doing was determining the Coriolis Effect - that is - determining the wind effect of a dropped object from a moving craft in heavens at a certain speed and altitude. There were corrections made for this according to the ballistics used. Our standard was an MB4, 250-pound bomb. We actually dropped cement bombs on rented farmland in North Dakota for one of my specialized missions. We lived in motels during these three-month special duty tours. I remember thinking that North Dakota looked like the moon during winter.

Fortunately for myself, the Vietnam war ended while we were next in line to go to Ubon, Thailand, a massive military base with a full arsenal of American military technology. Our units would initially be based there, then would be sent out - without weapons - into far more dangerous areas - like those across the DMZ - that were better for radar bombing guidance. The only time another unit was called was when the previous unit had been devastated by enemy forces. Our radar vans were made of magnesium, so that when they were hit by rocket fire they would go up in flames. Those who weren't killed or made numb from guilt and changed their names, were likely to be overtaken by opium laced Thai-sticks and heroin. The entire base was surrounded by marijuana fields.

And lest I forget this: sometime the radar bomb scoring unit would be so high on drugs they would inadvertently call their own location in as one of the targets.

I enlisted, starting in Basic Training just two weeks out of high school, to get a G.I. Bill so that I could go to college and become well educated good American citizen.

This is Vincent Johnson in memory of those who served at Statesboro Bomb Plot, signing out...."

I was a 1st Combat Evaluation Group member, also stationed at Detachment 3 in Statesboro, Georgia, from 1966 until 1968. TDY to Nakhon Phanom, Thailand, in 1968, we had a rack of M-16s with which to defend ourselves. If anyone in our unit used drugs it wasn't common knowledge, and we never targeted our own location. In 1968 we had good leadership and did our jobs professionally. While I was at NKP, our unit in Laos was attacked by North Vietnamese soldiers and overrun. See "Lima Site 85" on the Internet. Thanks

My name is Gary Asbell and I was stationed at Det.3 1CEVG Statesboro Bomb Plot from 1976-1981. I remember my buddy Vincent very well. Hope all is good with you. I am living on Long Island NY and working at a school district as a maint mechanic. 10 more years until I retire for good. Wow how the years just fly by. The site at Statesboro is long gone but the memories will always be there in my heart. Col. Douglas was the head in charge when I left in 1981. I always wondered where the guys all went and who was still with us and who has passed on. Hey look me up on facebook or drop me a n email at ESFD455@optonline.net
I retired from being a medic at a fire department here on LI and still work at my maintenance job and having fun. Stay safe and healthy my friends. Sgt. Gary Asbell Det.3 1CEVG SAC Statesboro Bomb Plot................