A belated few pics of Bruce Conner at Michael Kohn 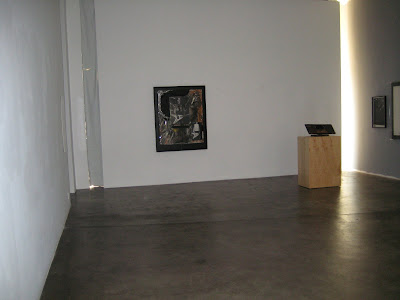 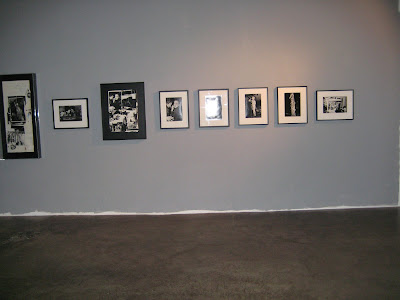 Apologies to my ever growing readership for lack of recent posting.
I've been quite busy last week and when I tried posting over the last couple of days my connection failed me.
Anyway, I've recently mentioned a few shows worth seeing, and since the Bruce Conner show at Michael Kohn is ending next week, I thought I should post a few pictures.
The show documents the West Coast early punk scene, but since it's an artist who took the pictures they don't look like straightforward photojournalist pictures. Rather, they constitute a shrine to a vanished scene, a number of which participants met an early death, because, you know, sex and drugs and rock'n'roll are not necessarily what brains and body need.
Conner had the gallery walls painted gray, the surface being left incompletely covered to create a club-y atmosphere, in addition to the spotlights. This being an art gallery, it doesn't look that nightclub-y to me, since it lacks a vibrant soundtrack and a great many unwashed dancing bodies, but it changes from the usual white cube.

The best part of the show however is the movie (Eve-Ray-Forever) projected in the adjacent gallery. Conner is better-known in Europe as an experimental filmmaker, and I do think this is where his talent is. It's a projection on 3 separate screen of various pictures (there's an explanation of the sequence of their apparition and their non-repetition in the gallery but I failed to pick it up) in B&W. It's fast and and dynamic but also subversively funny.
Since next week there's Thanksgiving if I were you I'd go see the show now, so you're safe re: opening hours. Please say hi to the lovely Nancy Meyer for me if you gos ee the show!
Posted by Frenchy but Chic! at 11:26 AM