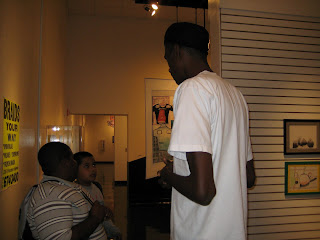 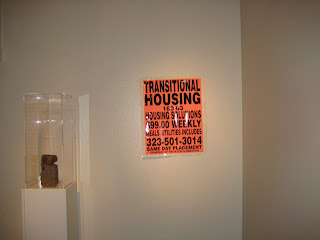 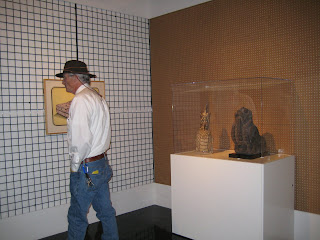 Aside from the WGA strike our cousins are waging in The Other Cultural Industry, last week has been truly wonderful on the art front here
in LA. It's not so often there are so many good things to see in town, but for once it all looks pretty good.
On Wednesday was the inauguration of the installation created by Mark Bradford and Ruben Ochoa at Charles White Elementary School, in collaboration with the school children and LACMA.
Charles White Elementary is located on the Westernmost part of MacArthur Park, on Wilshire and Carondelet St., right across from the American Cement Building (awesome architecture!). There are some great Deco and Spanish style buildings around, so I'd advise to go get some grub in either nearby Koreatown or on the other side of the park (Langer's maybe, if you like pastrami), stroll around and then visit the show. I'd strongly advocate a visit on the Echo Park side or even just going up and down Alvarado for people not familiar with the area, as the artists installation is very much referring to vernacular elements of the neighborhood.

Anyway, I came to the press conference (yay! bloggers are press for LACMA! Thanks, Allison!) not knowing much about the project itself since the press release detailed a lot of the initiative behind it but very little about the art. Nevertheless, I think Mark and Ruben are two of the best artists working out of LA right now (along with Edgar Arceneaux) so I blindly trusted the project to be at the very least interesting.

I sat alongside fellow press people (you have no idea how much this sentence makes me chuckle, dear extended readership!) to endure several introductory and vague speeches by Zev Yaroslavsky (he should rehearse his speeches more or get someone to write them more precisely) and such likes, which I don't really mind, but I just mention them because the schoolchildren who were attending were so well-behaved during what must have been very long and boring for them, they should be praised here.
Most of the press release and the speeches were about how Prop. 13 effectively killed public funding for the arts in schools, how good arts are for children, and how great it is that LACMA, through its Education Department, tries to remedy some of this by funding projects and exhibitions involving schoolchildren*.

LACMA's first project with Charles White Elementary is especially meaningful because the school is located on the former site of the Otis College of Art and Design. Ruben Ochoa is an alumni and so I think is Mark Bradford, making their selection as the first artists in this partnership all the more significant.
They have been selected by the Education Dept. which worked closely with LACMA's curatorial staff to select real artworks from the collection to be displayed in the school art gallery, all of this curated and arranged in a really smart and fun installation by Ruben and Mark. The selection had to pass a very tough test from the conservation department to be allowed to go out.
The artists worked for about 10 months and ended up with an installation that incorporates visual elements of the neighborhood, which you will see in the pictures here.
My little Frenchy self has a bit of a vocabulary problem as I don't really know the words for the moving inflatable thingies for example, or for the canopy-structure in the front room, so I'll refrain for describing them. Just wanted to let you know the first room is fairly impressive, with a fabulous hand-painted didactics/credit line/title wall I didn't photograph, but totally worth the detour in itself, as the Michelin would say.

In any case I was really impressed by how Ruben and Mark, whose visual "signatures" (let's not talk about style) are very different, even if their interest in the urban and social vernacular is very similar, managed to merge their own aesthetics to create an installation that combines art objects from various cultures, civilizations and eras (from Pre-Columbian to Indian to Contemporary Western art), various mediums (painting, prints, photographs, sculptures) as well as the elementary school students drawings.
The children drawings were also amazingly good, and the kids seemed extremely happy to be in the show and talk to the real artists.
One of the pictures in the previous post shows Ruben and Mark talking to these two kids who were so eager to meet the artists, and asked what their work was. Mark explaining the concept of installation and appropriation was to die for: he simply compared buying clothes and wearing them as an act of appropriation and curating/making an artwork and an installation. Smart, simple, effective, and Mark being Mark, very funny!
It's probably one of the best shows I've seen recently, really contemporary in its use of collaborative techniques, social intent, vernacular culture meeting groundbreaking contemporary art, while firmly rooted in a local context. It also proved educational doesn't have to mean boring, as the bright smiles of the kids testified, and that the product of a collective effort can be homogeneously combine to design an elegant exhibition.

Do I have anything to complain about? No, not about this specific project. It's beautiful, open for the next 6 months (in the afternoon mostly)and totally worth going to visit. If you go see a LACMA show, why don't you hop on one of the rapid buses and go East on Wilshire to see it?

If I have to drop my 2 cents and mix my metaphors (you know how I like to freely distribute my opinions, dear FBC! readers), it's just to express the following belief:
I don't think it's the museums role to remedy the critical lack of funding for the arts in schools. I command LACMA for trying very hard, but one sole museum cannot bravely substitute itself to the State and try to stopgap a mix comprised of the absence of political consensus, low taxes and therefore small public redistribution.
I'm glad someone is trying, and I'm even gladder the role of education in museums, which is usually invisible, is brought to the light at Charles White Elementary, but I'd rather the rich pay more taxes to let future generations discover art from an early age.

*About 2 years ago LACMA's education Dept. received what I believe is an endowment from the late Anna Bing Arnold to develop public programs geared toward children. Usually big donors like to put their names on buildings or donate part of their collection - and get a tax break - but very few are involved enough to donate toward more intangible programs. I wish more museum patrons would follow this example and give donation for conservations facilities or storage, scholarly lectures, and cutting-edge exhibition programming. All things which are not sexy but absolutely necessary to run a great and efficient museum.
Posted by Frenchy but Chic! at 2:08 PM

you commend. you dont command.