More Edgar Arceneaux To Cheer You Up! 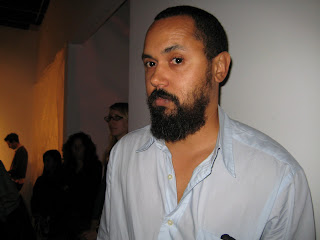 So last Saturday I've gone on a Culver City stroll right before heading to Surfas to buy fresh yeast (and duck sausages). I didn't take pictures and I don't have much time tonight to really speak about the art at length. Just wanted to remark there's an unmistakable scent of upcoming art market recession, since there was quite a bit of video work rather than the usual slapdash figurative acrylic stuff.

1. Best show: Go see Adrià Julià: A Means of Passing the Time, at LAXart
2. The show I'm annoyed at myself for liking, but I cannot help it: Sue de Beer at Sandroni Rey (in passing, the first show I've liked at Sandrony Rey over the last 3 years). I find her work derivative, but there was a sequence in the video that looked like a crossover between Sidi Larbi Cherkaoui and Mike Kelley's Day Is Done sprawling installation-cum-film. It's the Goth aspect, I'm sure. BTW, not the best Cherkaoui piece but I took what was available on YouTube.
3. The show I'd like to like, but for the life of me I cannot: Slater Bradley at Blum and Poe. Bradley was there performing in his costume. It looked too much like an undergrad take on Surrealism via video, and I think Zbigniew Rybczynski has already done it so much better 25 years ago.
4.Biggest disappointment, Nicole Eisenmann at Susanne Vielmetter.


Just seeing that 3 out of the shows I mention were showing video and installation would have sufficed to make my day.
In addition, I had the ineffable pleasure to know Edgar Arceneaux had just won a USA Fellowship AND was going to be included in the 2008 Whitney Biennial. I am so very happy for Edgar, whom I have known for 10 years and is one of my favorite artists in LA!
In addition to Edgar, the list of artists makes me want to truly go see the Biennial, since it will include Michael Queenland, Ruben Ochoa, Mary Heilmann, Michael Smith, John Baldessari, Walead Beshty, Rodney McMillian, Stephen Prina and a few others. LA is very well represented, as usual.
Congrats to Edgar and the LA contingent (and to Prina by extension, since he is now bi-coastal).

if only i could play piano like slater bradley