Mary Heilmann, To Be Someone 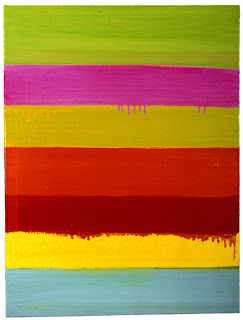 My neck comfortably resting on my très chic Isaac Mizrahi cashmere mini-pillow (sale of a sale of a Target sale), I’m eschewing the Jet Blue entertainment system to read the only thing currently accessible to my painkiller-numbed brain, the latest Vogue issue. It is the “Age” issue you see, the yearly “how to look great whatever your age as long as you are tall, thin, blessed with high-cheekbones and good hair and don’t have any money issues, really darling this is soooo effortless”.
I’m waiting for the “how to look cool when you are short and dumpy with bad skin” issue myself.
So I’m vaguely browsing it, and at the end, Ta Da! My favorite, favorite Cool Lady Artist, Mary Heilmann! This is it, everything is conspiring to derail my firm resolution of a contemporary art break this Summer! I am so happy with her inclusion I am keeping the issue for at least a week, rather than tossing it in the next recycling bin I find. Hail Mary, you are not one of those impossibly Waspy women who are the norm in the rest of the issue.

Anyway, I have been very excited over the last few months when running into Liz Armstrong as she was preparing the To Be Someone Mary Heilmann Retrospective at OCMA. Mary Heilmann is an artists’ artist as we say, meaning until now she never had the recognition she deserved but is highly respected among her peers AND the younger generation of painters/artists (the good ones, I mean). I have this half-baked theory about great paintings and artworks not lending themselves easily to photography: you don’t see the surface details, whatever amount of color corrections are never going to show the subtle differences between glossy surfaces, duller shines and minute variations in brushstroke sizes and patterns. Of course Heilmann’s work magnificently fits my crackpot theory, and even the gorgeous catalogue (there’s a Deluxe edition too) doesn’t give justice to her paintings.
My friends Ivan Morley and Donald Morgan and I were eagerly anticipating the show, and we were blessed in getting an invitation to the opening. Donald used to be her assistant when living in NYC, and I was very touched to see that she had remembered him and got him invited to the dinner. I like when artists don’t have an attitude – I don’t do well with Prima Donnas and egomaniacs, as a rule.

Now this is not the Artforum “scene and herd” diary so I won’t tell you who was there (note to Artforum: if you do cover West Coast events, don't mention your NYC cronies. We don't care. They are ugly Yalies anyway and they can't distinguish painting from critical theory).
I just want to mention the atmosphere was warm and fuzzy including the speeches. Everyone was relaxed and happy which changed nicely from the increasing stuffiness creeping over LA now that the institutions are so ostentatiously taking themselves sooooooo seriously, what with all these NYC /East Coast imports being hired everywhere.

Anyway, down to the exhibition. It started with very early works, part sculptural part painterly. They are reminiscent of Eva Hesse, minus the pathos and the tragedy, with a very playful and joyous edge. Interestingly they look very self-confident and don’t show the typical hesitation of these pioneering work that were neither/nor painting/sculpture but something else entirely and were going to give birth later to Judd’s specific objects (via Ann Truitt early experiments. Honneur aux dames).
Then we moved onto the first paintings themselves. I am not going to describe them by titles because I am typing from thousands of feet above the lovely USA, without access to any sources.
Generally speaking, the show can be described as a little bit crowded (the space is small and there is much to see), filled with gorgeous explosions of colors one after another. I think it had to look crowded out of necessity, out of the high quality of the paintings themselves. Each one and every single one of them could hold an entire wall. They are so strong whatever their format that even the small ones don’t seem so intimate as rather highly charged little painterly bombs packed with presence.

The sense of color is overwhelming in the way it is mastered: Heilmann can work from subdued monochromes and duo-chromes to multicolored bright hues, escaping the vagaries of boring minimalist chic as well as avoiding any sense of clash or gaudiness.
Another impressive feat is that first impression of sloppiness, immediately belied when the paintings are closely observed, at the leisurely pace they deserve. They do demand attention. Careful observation unearths under-layers of colors, say a dark green patch visible by transparency under a stratum of lighter blue that creates a dark blackish tone. Some white washes serve to tone down and reveal brighter colors.
I usually dislike sloppiness in art if it isn’t a deliberate part of the execution and even if it is (take that, Manfred Pernice!) it has to be extremely well done to pass muster.
It takes an extremely gifted, brilliant painter to pretend to be a bad one, as we can witness with Magritte’s Période Vache, Sigmar Polke’s early career and all of Kippenberger’s work. In short, appearing sloppy demands a great attention to balance, to composition, color arrangement and execution to create those masterpieces of seemingly effortless, carefree gestures. Mary Heilmann’s paintings are so deceivingly simple and easy, so attractive and playful in conveying this sense of spontaneity, as if they were made as an afterthought, in some spur of the moment casual encounter between the brush, the paint and the canvas.
They manage to let us forget how many hours of toil, technique and craft went into their happy radiance, their bright sense of togetherness. Appearances are deceiving, and it could well be that her work was overlooked for its awe-inspiring “simple” beauty , when too many of her male counterparts from the 1960s to the 1990s were stuffing their discourse and work with grandiloquent pomposity, uptight seriousness and macho self-aggrandizing postures. She was then too cool for her age, trop en avance, devoid of that would-be-rock-star attitude that plagues the art world.
Anyway, the show ends on August 26, so last chance for West Coaster to see it befor eit moves on. Future stops include Houston, Columbus and NYC.
Posted by Frenchy but Chic! at 9:11 AM