Deaccession for the masses, or another super long post 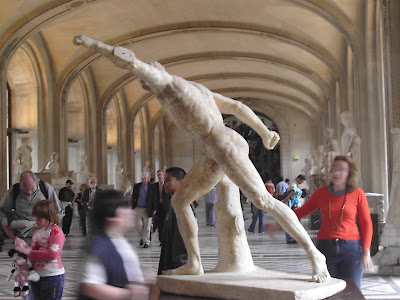 Since I apparently had the privilege of welcoming Tyler Green (unless it is Charlie Finch posing as Green, you never know) as a commentator on one of my posts, I had a look at his MAN last night. Something I hadn’t done in a while since I am on a health-related Summer break .
Just in case Tyler returns, which would bring my total readership to a whopping 7 people -Martine in Australia has also joined us- I’d like to remind all of my extended readership this is a totally amateurish blog. It looks like it, no?
I’ve started blogging to fend boredom during my whiplash-imposed break,as I can only concentrate in 20-minutes increments. I don’t bother to check my sources, in the intrepid pioneering spirit of Web 2.0 and Wikipedia, that pedestrian paean to collective ignorance.

Anyway, in his post Green was all riled up about stuff happening at the Hammer and by extension about the past deaccession (DX in MuseumSpeak) of the thing formerly known as the Hammer [Da Vinci] Codex (not to be confused with the bad book of the almost same name) , which effectively have been funding the Hammer for a while.
I’m not going to comment specifically on this case because I don’t know much more than what has been reported here and there. You’re not supposed to fund a museum out of DX-funds, but the Hammer had been started on such dubious premises I believe there wasn’t much of a choice for Ann Philbin to begin with.

Just a few thoughts: on the Hammer morphing into a “normal” institution. Gary Garrels coming to the Hammer really signaled a shift in the sense that he is better known as a good fundraiser, which meant that by hiring him the Hammer was probably going to shed its skin as a lively, happening exhibition space to become a “normal”, collecting institution. It also means the Hammer is trying to get out of the DX-funded budget situation, which is going to take a while.
It is a move which I find a bit sad, in the sense that collecting means a level of fundraising difficult to sustain in a city such as Los Angeles where the true collectors and donors are in fact very few and far between. It is a well-known fact that Hollywood recycles its money in The Industry and not in other cultural institutions. Since LA doesn’t have a finance industry/stock market that needs to launder its money pronto into innocent artworks, there’s a big penury of art collectors/donors here, what with 3 big museums competing for the same scare resources. And some of the collectors and donors here still prefer to give to institutions back East where they don’t have any ties because they believe it buys them "prestige".

In effect, it means the Hammer is probably going to cease being the groovy artist-friendly institution where everyone was feeling welcome, since the museum will need to become much more mainstream to attract more donors. The “old” Hammer was a breath of fresh air in a city where major museums tend to stay on the respectable, big names side. I sure hope the Hammer won’t become bland and boring and that it will start to recruit home-grown curators at some point, a wish I’d like to spring on all LA-institutions. In any case, it is understandable the museum needs to build a collection in order to grow, since collection=currency when seeking loans for exhibitions.

As for the practice of DX itself, I have to point out it doesn’t exist in France, where it is de facto illegal. Museums are funded by taxpayer money (since the French revolution, mind you), the collections are in effect the property of the French people collectively and as such are inalienable. Though we don’t know yet whether Sarkozy isn’t going to reverse that, since culture and education seem to have bypassed his persona entirely. In that case I will apply for political refugee status here.

Anyway, I was a bit baffled when I had to work on a set of DX here in the US. So for the public at large to know (you, my 6 faithful readers, plus maybe Tyler Green), curators truly dislike working on DX, and it makes us cringe when it is the only way to fund new acquisitions. You see, working in a museum is a little bit like the animal shelter: you need to rescue all these poor little artworks and find them a good home (your institution, hopefully) but alas sometimes for lack of space and funds you have to find other loving venues for the ones which are a little bit, ahem, different.

I am not totally against DX-ing, in the same sense libraries sometimes weed out their collections. Some works don’t make sense in the general sequence of the museum holdings, meaning it is almost impossible to show them ever (say, one lone Judd sculpture in a collection that is in majority German expressionism). Some works are simply sub-par and it would make sense to DX-them and use the money collected to upgrade to a better work by the same artist or something from the same period.
Basically DX is a tool to upgrade the collection at large, and unfortunately in many cases it is one of the only monetary way to do so. I tend to think it is a by-product of the all-private US collecting practice: if Big Donor X gives you his entire collection with 15 masterpieces in it and 60 other dubious things, you accept everything in bulk, making sure in the paperwork you can DX some. Or else you’re screwed with 15,000 engraved shot glasses in addition to your Kandinsky.

There are many complicated guidelines to ensure the museum isn’t screwing up.
Do not DX living artists. Sometimes it is impossible to know if they are still alive and you need to give weirdly delicate phone calls.
Check all paperwork to make sure it is DX-ible. Contact all donors, heirs, etc. to request their agreement to DX said artworks. Make sure other museum departments have their say and can retain the artworks if significant for them ( what may seem a truly bad artwork by a minor contemporary artist can in fact be significant in, say, American Art, or Prints and Drawings or Photography, etc.)
DX have to be approved by all curators of the museum, then by the Board. Then sold publicly at auction, and only if they are bought in can you go through a private dealer.

All in all it is a fairly tedious and extremely long process, which in my mind isn’t worth the effort if the only consideration is the monies collected. Because you see, curators hate parting with the good stuff that would in fact bring money, so usually what goes to the auction house tends to be the crap you need to get rid off to clear a bit of climate-controlled storage space. So the amount collected at the end is barely worth the effort - though personally, if there was a kick-ass ugly Peter Doig from my institution I could sell at auction for $11 M, I'll sure go ahead with it to build a lovely conceptual-oriented collection instead.
I have never participated in DX-ing major works to upgrade to an entire new collection, so I cannot say anything about it except it must hurt as hell. I would hate to have to do it, but I understand the reasoning behind, say, DX-ing some minor Derain to get a major Matisse for example. DX-ing a Da Vinci codex makes sense if you are a contemporary art institution, not if you are, say, The Library of Congress. It is almost un-showable permanently anyway (light issues). As far as the money has been used, I’m sure Ann Philbin would have much preferred using it to buy artworks than to run her institution. As it is, I am not sure she had much of a choice at the time.


All in all, if donors were more generous in the LA area, DX would (ideally) be unnecessary. In addition, if there was a large consensus in the US to fund museums publicly, a more equitable balance between public good and donors interests could be achieved and many conflicting issues could be avoided. Which is something I’d talk about later as this post is way too long.
Lastly, the photograph above has no relation to that post whatsoever, it;s just a picture I took of the Areste Borghese at the Louvre, my Alma Mater.
Posted by Frenchy but Chic! at 12:01 PM

Tyler is an idiot. He certainly has no experience in the museum world, and no standing to criticize any kind of museum practice. Worst of all, to repeat myself, he is an idiot, and all of his nasty, micro-fascist remarks about people who work in the real world are first and foremost illegitimized by the utter stupidity of those very comments.

You're too kind, really, when you yourself point out his stupidity, in the fuss he's trying to make about the Hammer deaccession of the Codex.

While we're on the subject, no offense, but the idea that Charlie Finch would comment on your blog is ludicrous, almost as silly as the notion that there is some kind of symmetry or equality between him and Green.

Green is a knock-kneed dweeb who sits slavering at his computer all day long, and gets some kind of sick fix from yapping at the heels of the art world. Really, you'd think a person would have more dignity.

More importantly, who are you?

Ah, I'm not relinquishing my own identity to someone who's choosing to be anonymous...

Anyway, I'm a former big-institution(s) curator who briefly switched to the gallery world, hated it and now I'm doing freelance (and recovering from whiplash injuries, so I'm out of the game for a few months).

In any case, whatever you think of Green whom I do not know personally, please keep your utmost civility when commenting. We are Frenchy, and chic! and would love for people to remain courteously elegant when commenting. Sinon c'est pas du jeu...

re: Finch, it was a joke, really. I guess my language skills are too weak to convey my skewed sense of humor. Sorry about that.