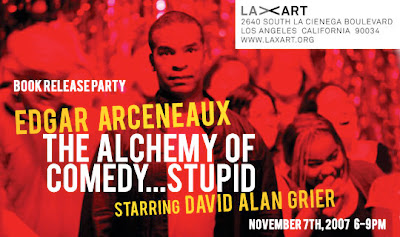 The title above is just a very pedantic way to announce some corrections:

The ever delightful Alexis V. who has been profusely thanked in October signals to my attention the following: his driving school project was a series of lectures, not a show, and that his inclusion of Mrzyk and Moriceau in a group show a Monolilithic French Institution *allowed* young curators to organize within its venerable walls was also a way of curating a solo show in the context of a group exhibition.

And, in case my previous post was confusing, the LAXart fundraiser is tonight.

I'd like to take advantage to announce the book launch of Edgar Arceneaux The Alchemy of Comedy ... Stupid at the same location this coming Wednesday, 6 to 9 PM.
I've known Edgar for many, many years, and over the last 3 years I've seen him rapidly developing in a major artist on the American scene, first with a fabulous show at The Kitchen in NYC, then with his collaboration with Charles Gaines at Redcat and most recently his solo show at Susanne Vielmetter. I think Edgar is poised to become a huge artist in the next few years. And, not only he is very talented but he is absolutely charming in person, in addition to being an artist who likes to collaborate with others.
Go support Edgar!

And go support the striking writers-in-arms: donate them food, warm picketing clothes and sturdy boots, and maybe try to help them find shelter when their rent checks start to bounce. Go writers!
Posted by Frenchy but Chic! at 2:18 PM