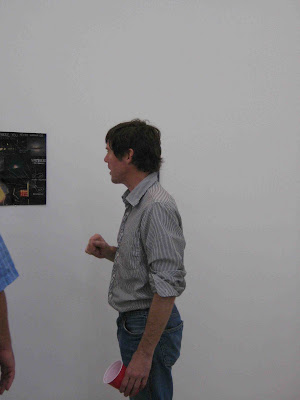 After showing you the pictures of some of the art in the previous posts, here you can see some of the people who were in attendance, above Steve Hanson, showing a piece to a couple of people.

The artists Vish Jugdeo and Scoli Acosta with writer William Wright laughing because I'm waving at them from upstairs, where I'm admiring Vish's piece (I didn't know it was his actually, I love it when a piece I like has been made by a pal!) 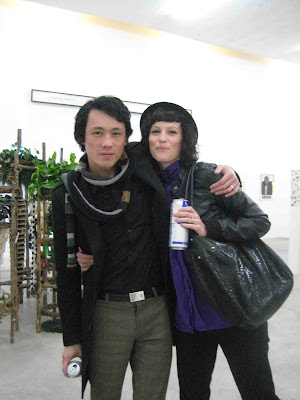 Artist (and former colleague) Peter Wu with girlfriend Samantha (whose last name I didn't catch, apologies!)
Everybody who's anybody, as they say, was around, and I socialized with more people in one evening than I usually do in a month, including Tom Solomon who was wearing a great pocket flap, but was too modest to have his picture taken. I saw my pal the fabulous painter Ivan Morley and we saw a bunch of people, but my memory isn't that good tonight so I'll stop the name-dropping here.
It was a really cool anniversary, everybody was relaxed and mellow just like the good old days when there was no money to be made in the LA artworld, and there was this great sense of community around. Ah, the good old days of yore... On another hand, I was pretty sore and really tired (see car accident mentioned elsewhere) so if there were tensions around I didn't notice, and frankly I couldn't care less. I was just glad that China Art Objects had made it through its first decade, and I wish Steve and his partners many more decades like this. Happy anniversary China Art Objects, and a special thought for Giovanni. As I've said elsewhere, we miss you.
Posted by Frenchy but Chic! at 9:40 PM

Thank you for sharing this, it is always very interesting to read about artists and art from around the world, espically up and comming countries such as China.