Your Social Life In Anniversary Mode 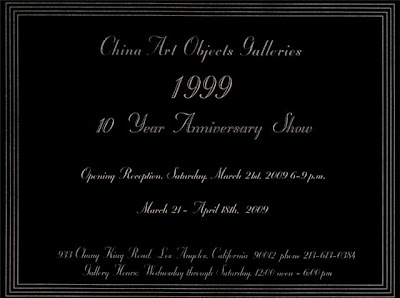 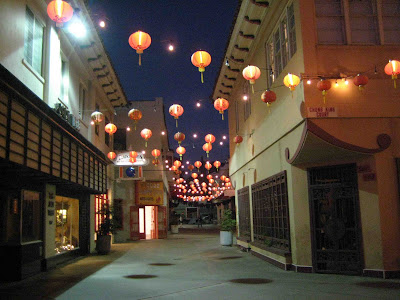 No, not FBC! anniversary, but China Art Objects, the Chinatown gallery with which everything started (well, not exactly, let's call it the second or third LA art boom, OK?).
China Art Objects opened 10 years ago and will celebrate this Saturday with a show/bash at Cottage as well as in its original location, followed by an after party at the Mountain Bar. When you go see the show or if you end up at the Mountain Bar, please don't forget to have a thought, or better yet a drink in honor of the late Giovanni Intra, one of the co-founder of China Art Objects. The opening will last from 6 to 9 PM, with many, many artists, so many it's impossible to list them all.
Many are personal pals of FBC! so I'll pay a rare appearance at an opening, but on the early side as I'm recovering from yet another car accident!

[To the moron who plowed into my car at a red light and sent me flying into a SUV: Drop. Dead. Now. And next time you drive, that is if you don't drop dead now, do it with a valid driver's license and put your bloody cell phone away. My future lawyer is going to have a field day with you, b••ch!].

I'm fine, if a bit sore, and taking meds that make me very sleepy, hence the early appearance at the opening. Meanwhile Mam'zelle VaVaVoom is at the car doctor, waiting for her diagnosis, hopefully she's fixable. I have a nice replacement rental but nowhere as cool as Mam'zelle

Unfortunately, because of this I have to make a choice in my opening attendance, so I will miss Walead Beshty at LAXart, but you guys should be able to go, before or after China Art Objects.
There are lots of other openings on Saturday, such as the group show "The Ballad That Becomes An Anthem" at Acme, with among others, FBC! absolute fav' Mary Heilmann and also Rebecca Morris.
To make your life even more complicated, there's an interesting group show opening at the Armory in Pasadena, Under The Knife (I guess "under the box cutter" was not so appealing, and "running with scissors" was already taken) about artists cutting up paper and doing collages. It's from 7 to 9 PM so I guess if you start at ACME, go to LAXart, then China Art Objects/Cottage you may conceivably be able to reach the Armory at the tail end of the opening.
But wait! There's also an opening at Charlie James in Chinatown. And one at Marc Foxx, who also shows some work by the recently deceased Hanne Darboven.
All in all a pretty busy weekend for opening-goers in LA. Have fun, but above all drive responsively and shove that cell phone in your trunk, OK?
Posted by Frenchy but Chic! at 3:12 PM