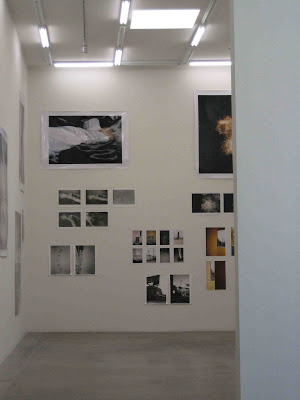 It's not that I enjoy breaking down posts in several sections, it's just that the stupid template I use cannot support more than 5 pictures/post.
Anyway, at Kim Light, Marianne Mueller (above) has seen way too many Wolfgang Tillmans, methinks. 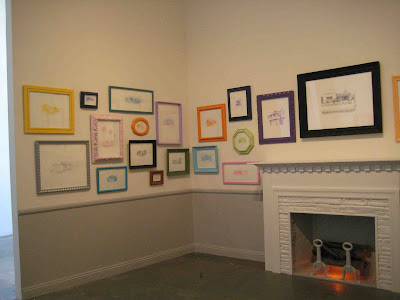 Still at Kim Light, Penelope Gottlieb worked on a drawing installation "No $ Down" referencing the California real estate bubble. It's the kind of work I find to be "almost there". The drawings themselves are not really standalone ones, despite being sold as such, and it's a pity because this show works well as an installation and not as a series of separate works. The idea in itself is interesting (typical housing units represented, broken down by drawings of homeless shopping carts) and right on target, or timely.
But the cutesy colored frames (they all seem to be coming out of Aaron Bros. and hand-painted by the artist) matching the drawing colors should be made to go, they totally ruin the overall effect. This being said, I think Gottlieb is an interesting artist (I love that on her bio she lists her work as belonging to "numerous corporate collections including the Fannie Mae Corporation), but needs a bit more, I don't know, rigor. 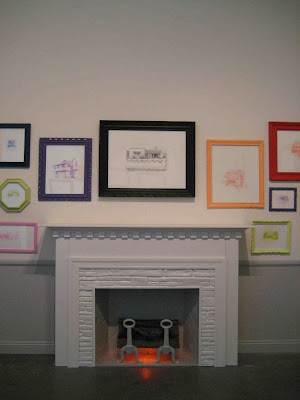 The last "almost there" artist I saw was James Everett in the project room at Roberts & Tilton, but as I said my camera battery died before I could take a pic.
It's called "Opium Feast" and the steel and wax sculpture is much more interesting than, say, anything Sterling Ruby has ever produced (can't understand the hype, Ruby's work is mega-derivative, maybe it's the macho sculptural component that titillates collectors?). Unfortunately this sculpture is paired with 3 panels (including one called "Climax" that incorporates "ejaculation from a movie star" in its material, hey the 1990s are soooo last Century!) of meaningless words and sentences that want to show their meaningful value by being engraved in Roman-type lettering.
But it's drywall, maybe as some kind of apt-metaphor about the entertainment industry or something (I'm too lazy to think about it, frankly). Drywall isn't really suitable for engraving, and the result looks too sloppy, especially compared to the wax sculpture.
Which, BTW, looks like a nightmare to ship and to conserve, so hurry to see it before it disintegrates!
Becca Mann's drawings, in the same room, were totally unremarkable. Not bad, but nothing to write home about.
Posted by Frenchy but Chic! at 2:07 PM

Email ThisBlogThis!Share to TwitterShare to FacebookShare to Pinterest
Labels: Yet Another Day That Could Have Been Interesting In Culver City