Your Social Life, Past, Present And Future 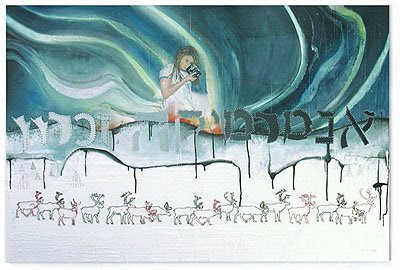 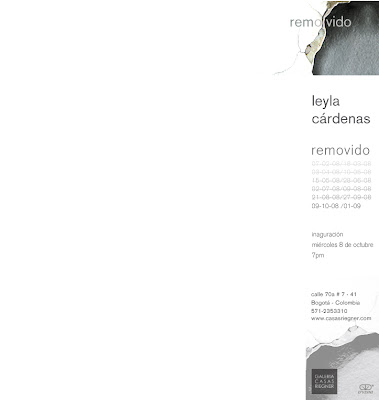 Finally, here's your program for now, yesterday, and the rest of the week!

If you were in Bogota yesterday, you probably attended my friend Leyla Cardenas's opening at the Casa Riegner Gallery. The invite is displayed above. If you were in Los Angeles and are not Jewish (or you are, but from a miscreant, atheistic tendency) you may have attended the two openings at LACMA: the Fabiola show that you really, really should come see ASAP, it's so good you won't believe it (Santa Claus, you know what I want this year, the catalog), and the Hard Target show that, if you are part of the 50% of humanity born with a uterus, you can forget about.
Too much masculinity thrown into your face, and not the kind you want to look at, thank you very much. The show is really too crowded and despite the presence of a really good Mark Bradford piece and a Joe Sola piece, terribly installed. It may have looked better without all those helmets around, and without wanting to redeem the ultra macho, super sexist, boring subject with maximum political correctness in the quotas of minority artists included (and the minority includes us, you know, the uterus-laden half of humanity).
Also... next time don't have your opening on Yom Kippur! I'm sure my immense Jewish readership must have felt stifled not to be able to attend the opening of one show about sports and masculinity, and the other displaying hundreds of pictures of a Saint. Maybe I'll have a poll soon: what kind of show is it OK to miss because it opens on a major holiday?

Anyway, enough grumbling, because there's one good thing about that show: if you go see it, you will have to walk through LACMA's European collections afterwards to reach the excellent Francis Alys/Fabiola show, and while doing so you will pass some very good "Gothic" 19th century ceramics and sculpture, a very weird Degas, etc. I think it's genius to have installed the Fabiola show where it is. I've seen that show 3 times, and I can only urge you to do the same. You have until January 4th, so run, run, run!

All of this happened yesterday, what about today? Today was/is the opening of the Freewaves Festival, titled "Hollywould" this year. It's on Hollywood Boulevard, it's continuous until Monday, almost everything is free, and FBC! special pal and excellent video artist Jose Carlos Tixeira is in it, at LACE on Saturday. I'm afraid I have too much work right now to be able to go, but I sure wish I could as the whole event seem really interesting. As you know, parking sucks there, so you'd better take the subway (come on, once in your life, you can!) or buses.

And tomorrow? That's right, what is it you have to go to tomorrow? I'm immensely proud to report you can go to LA Louver see the Ken Price show. You should take off work early and take advantage to check the Martin Kersels show at SMMOA right before, and after you're done, go have dinner at Anisette! I'm happy to recommend that show because a) I never go to the Westside, but b) LA Louver always sends me their press releases, and it's a historical gallery, and Ken Price really deserves to be better-recognized. I love his work, he took his sculpture where no ceramist ever went, far, far away in another galaxy, and it looks weird. Porphyrically weird.
You can also check Patrick Painter, because there's a French artist who's also a good painter, Bernard Frize, so you check de visu that aside from producing so-so writers who get the Nobel Prize, France also has some excellent visual artists in her midst. But you can avoid Andre Butzer, unless you want to check de visu that aside from producing the genius Kippenberger and good writers, Germany unfortunately also has some mediocre also-ran into her midst.
Speaking of Kippenberger, I'd love to hear from my readers, to know what they think about the show at MOCA. I loved it, and I'd like some artists to tell me what they think. I don't really care personally what Christopher Knight thinks, who, in passing, has a blog at the LAT that's much more interesting than his ordinary criticism (for the record, I do think he's a good mainstream critic, but I think Los Angeles deserves a couple more mainstream critics. Oh, wait. There's no other paper here, and TV sucks).

And now, unto Saturday! Fellow blogger Carol Es has an opening at George Billis gallery. I know she went through difficult time recently and deserves a warm hug and a great opening. I don't know her personally, but I think I should. So go to her show, and give her that hug for me, please.

Friday and Saturday next week, also I URGE you to go at UCLA and see Sidi Larbi Cherkaoui, my favorite, favorite choreographer/dancer. It's rare, it's magical, it's beautiful and fabulous. Tickets here.


Next Wednesday, in Valley Glen which, as it names indicated, is in the Valley, there's Untidy, The World of Doug Harvey, the LA Weekly art critic who also happens to be an artist, a curator and a blogger. Do you see a trend here? We're between bloggers here! And why do you think I mention the trend? It's one of my super-subtle transition to announce the new-ish LACMA blog. There are two people I know who write (so far) in it, the very sweet Allison Agsten who's in charge of communication at the museum, and she's doing an excellent job venturing into art writing territory. Congrats Allison! There's also the fabulous Austen Bailly, my favorite American Art curator, the one who introduced me to the joys of Paul Cadmus, remember? (Austen, let's do that show!!!!). They kindly added me to their blogroll, but aside from that I really like theirs. The design is very clean, very simple, away from the rather cluttered feel of the official LACMA website. The entries are very interesting, and I love the spotlights on some lesser-known aspects of the collection, as well as the review of other museum shows. Welcome to "Unframed", that's their name, and congratulations for a very good blog (I'd be happy to guest-blog for you in the future, BTW, if that interests you).
Posted by Frenchy but Chic! at 9:08 PM